newsinfo / Nation
Nation
‘WHAT CAN WE DO?’ WHAT CAN I DO? HOW DO WE CHANGE THIS?’ 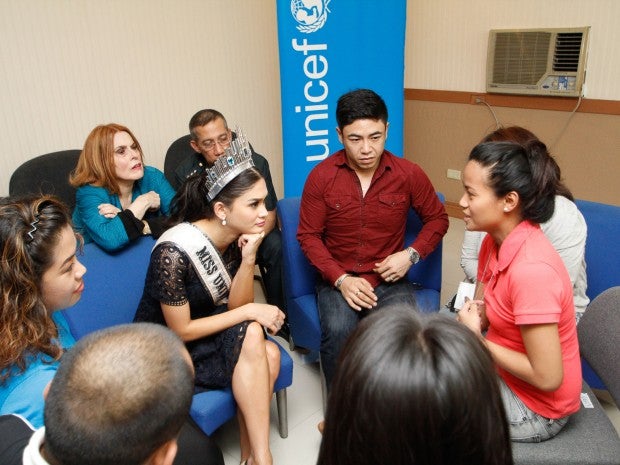 IT was an “unusual” advocacy to pick, but when asked during the question and answer portion why she deserved the Miss Universe crown, Miss Philippines said she wanted to advocate for human immunodeficiency virus (HIV) prevention and awareness.

Starting off in her home country, reigning Miss Universe Pia Alonzo Wurtzbach began walking the talk, more than a month after the controversial pageant in Las Vegas, Nevada, USA.

Wurtzbach on Wednesday met with people living with HIV and health advocates during her visit at the Armed Forces of the Philippines Medical Center in Quezon City.

In an intimate encounter and dialogue, the 26-year-old beauty queen listened to the stories of young people afflicted with the virus and learned about the experiences of youth who champion HIV response in various parts of the country.

“I was able to talk to some wounded soldiers and also with people who are afflicted with HIV/AIDS. Hopefully next time, I’ll spend more time with them. But I was able to do a lot,” Wurtzbach told reporters in an ambush interview.

“Interesting naman talaga yung mga stories nila. Ako I sincerely enjoy it. (Their stories are really interesting. I personally enjoyed it),” she added.

The country’s third Miss Universe title-holder hoped that through facilitating dialogues about the “hidden epidemic” that hits the country, the stigma on the people living with HIV/AIDS will be removed.

The United Nations Children’s Fund (UNICEF) Philippines, which gathered the young people met by Wurtzbach, welcomed her “strong call” to address rapid growth of HIV infection in the country. 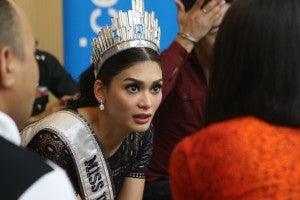 “It’s very encouraging to see a person like Pia engaging herself in an issue which is not necessarily a common thing, you know, a Miss Universe would engage in. They would engage in environmental issues or something else. But HIV is a difficult issue,” UNICEF Philippines Representative Lotta Sylwander said.

“That’s why I’m particularly impressed that she wants to engage in that,” Sylwander added.

Sylwander said Wurtzbach has learned more about different situation and the kind of treatment that people with HIV/AIDS were experiencing in this country. She also learned about the initiatives of HIV/AIDS champions and asked them how she could help.

“They importantly told her about the stigma that’s going on in the country and she was teary-eyed,” Sylwander said.

According to her, Wurtzbach was particularly touched about the story of an HIV-positive young mother who delivered and wasn’t sure yet whether the baby was HIV positive.

“She said, ‘What can we do?’ What can I do? How do we change this?’” Sylwander recalled.

Sylwander said the participants wanted to inform and educate more people on how to protect themselves from the disease. They realized that Wurtzbach could use her voice to champion the cause.

According to UNICEF, the Philippines has one of the fastest growing rates of HIV infection in the world. The country is one of only nine countries globally where the number of new HIV cases has increased by over 25 per cent.

Sylwander said that Wurtzbach would return in April to hear more stories of young people with HIV/AIDS in Cagayan de Oro, her hometown. 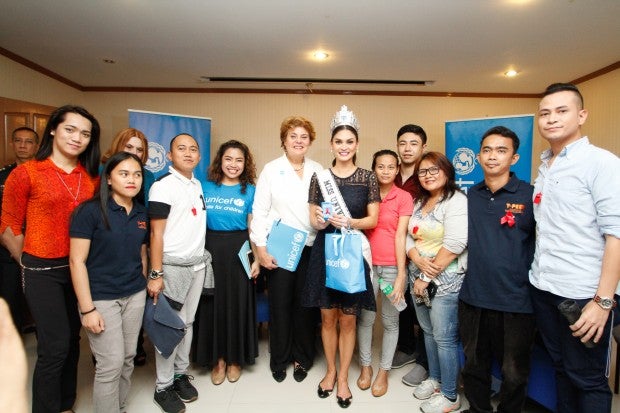 “She will come back in April. Probably we can arrange something for her so she could meet other young HIV/AIDS positive people and talk about their treatment, how they were infected, why and what they wanna do and how can they support others,” she said.

The UNICEF country representative said they look forward to working with Wurtzbach the whole year and even after her reign as Miss Universe.

For LGBT activist and HIV/AIDS awareness advocate Niccolo Cosme, Wurtzbach “wanting to help is an empowerment.”

“Some people might think, what’s the big deal? She’s a beauty queen. For me, it’s putting leverage in to the advocacy. We’ve been waiting for someone in that stature to speak up,” Cosme, who initiated the Red Whistle campaign, told INQUIRER.net.

“It’s not easy to speak up about HIV eh, more so for a woman, more so for a beauty queen. It’s difficult. So for her to actually do this, it’s amazing and empowering,” he added.

Cosme said Wurtzbach learned about different cases and intervention being done in the country.

“For example in Cebu, 75 percent of affected people is not on sex, it’s in drug use. They’re using contaminated syringes,” he said.

Wurtzbach previously said that as Miss Universe, she doesn’t just represent the women anymore. She said that she’s representing all gender and everyone.

As part of her advocacy, she said she would do a public HIV/AIDS testing in New York City when she returns.

READ: To show the world her advocacy, Pia Wurtzbach wants to get tested for HIV

“The first step is get yourself tested and to let yourself be informed. I have plans of getting tested myself, too,” Wurtzbach told INQUIRER.net during an exclusive interview with Inquirer Lifestyle.

“If I take the first step, then maybe others can follow suit. So I hope that they do, they really do,” she added.