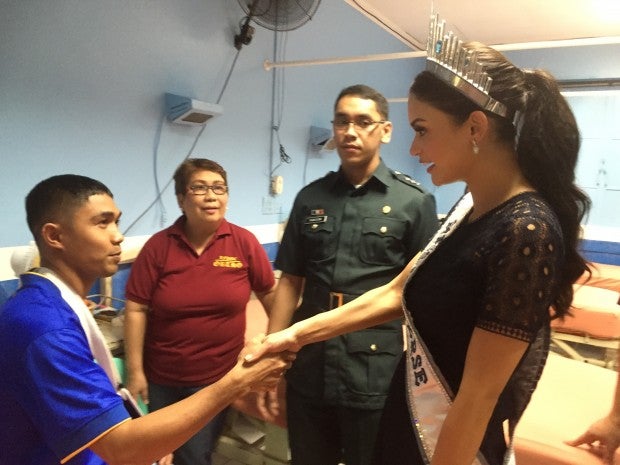 Miss Universe Pia Wurtzbach chats with one of the wounded soldiers confined at AFP Medical Center. She visited battle casualties as part of her charity event. It was an encounter that he did not expect. FRANCES MANGOSING

AND they met the “queen.”

Corporal Fulgencio Gacutan, one of the wounded soldiers confined at Heroes Ward 3A, suddenly found himself face to face with Miss Universe Pia Wurtzbach who paid a visit to the Armed Forces of the Philippines Medical Center on Wednesday afternoon.

The beauty queen titleholder met about 40 patients, and chatted with them one by one and granted photo opportunities.

Gacutan, 28, a soldier from the Special Forces, broke his arm after being hit by an AK-47 in an encounter with New People’s Army in Agusan del Sur last November.

He said he was in awe that the reigning Miss Universe took time to visit them.

Gacutan said he was too nervous that he was only able to say “thank you.”

Lt. Gen. Edgar Fallorina, AFP Vice Chief of Staff, said they were grateful for the visit.

“Her mere presence uplifts the spirits of our soldiers, especially our patients. This is once in a lifetime experience,” he said.

Wurtzbach was also gifted with a name plate, patch and a Philippine flag used by military personnel.

“Doctors contributed money for the special nameplate to show how much they admire Pia,” she said.

Wurtzbach, meanwhile, said she enjoyed talking to the soldiers.

“It’s very nice to hear their stories….I sincerely enjoyed it,” she said.

“They say it’s their day but I feel like it’s my day being with them,” the beauty queen also said.

Wurtzbach also met with HIV patients who were brought from another hospital.