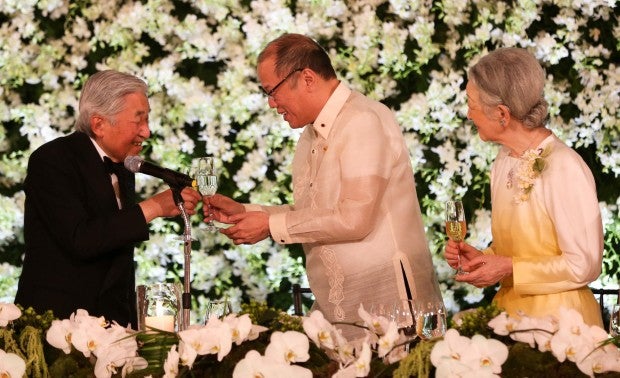 President Benigno Aquino III (center) raises a toast to Emperor Akihito (left) and Empress Michiko during a state banquet in honor of the Japanese imperial couple at the Malacañang Palace. LYN RILLON/INQUIRER

Emperor Akihito on Wednesday night said the Japanese people “must never forget” the loss of Filipino lives caught between the battles of Japan and the United States in World War II.

The emperor made the statement as he raised a toast for the continuing strong relations between Japan and the Philippines at the state banquet hosted by President Benigno Aquino III for the imperial couple at Rizal Hall in Malacañang Palace.

“Last year, Japan marked the 70th anniversary of the end of World War II. During this war, fierce battles between Japan and the United States took place on Philippine soil, resulting in the loss of many Filipino lives and leaving many Filipinos injured. This is something we Japanese must never forget and we intend to keep this engraved in our hearts throughout our visit,” Emperor Akihito said.

The 82-year-old royal also praised President Aquino for his “sagacious and distinguished leadership” that made the Philippines achieve a “steady development as a vital member of the Asian community.”

President Aquino led a toast for “the strategic partnership of our two nations (which) serve as a firm cornerstone for peace, stability, and progress in our part of the world.”