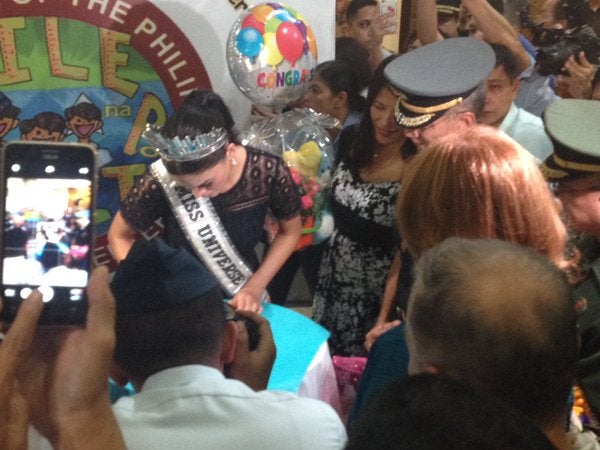 Miss Universe Pia Wurtzbach paid a visit to battle casualties confined at the Armed Forces of the Philippines Medical Center in Quezon City on Wednesday afternoon.

The newly crowned beauty titleholder visited the wounded troops of Heroes Ward 3A as part of her charity event.

She was greeted by AFP vice chief Lt. Gen. Edgar Fallorina and other officials.

The visit was arranged by the Makati Medical Center Foundation. People living with HIV from outside the hospital will also be brought in to meet Wurtzbach.

HIV awareness is one of the beauty queen’s advocacies.

READ: To show the world her advocacy, Pia Wurtzbach wants to get tested for HIV

Wurtzbach was crowned as Miss Universe in Las Vegas last month after an infamous blunder watched by millions on television worldwide.

American host Steve Harvey announced the wrong winner at first — Miss Colombia Ariadna Gutierrez. He later corrected himself, announcing that Wurtzbach of the Philippines is the real Miss Universe.

Wurtzbach is in the Philippines for a series of events, including a grand homecoming parade, various tributes and a meeting with President Benigno Aquino III. IDL