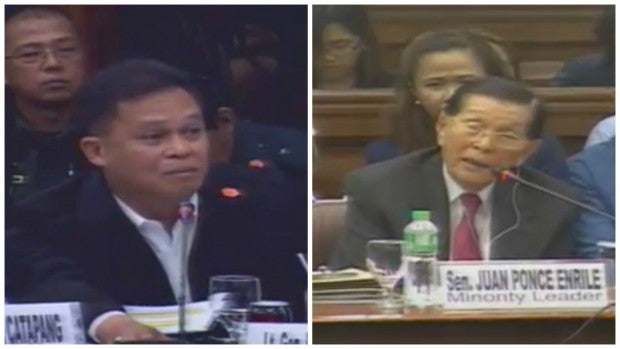 Senator Juan Ponce Enrile called out retired Armed Forces of the Philippines (AFP) chief Gen. Gregorio Pio Catapang for failing to order his men to send reinforcement to the “poor and beleaguered” Special Action Force (SAF) troopers being pinned down in a cornfield during the deadly Mamasapano clash a year ago.

He also slammed Catapang for not informing President Benigno Aquino III about the situation in Mamasapano as the retired official said it was the Philippine National Police’s duty to inform the commander in chief.

“You were in Zamboanga City. Did you inform the President about what’s happening?” asked Enrile.

The Senator then said: “Why not? He’s your commander in chief?” Catapang answered: “That’s a PNP operation. The PNP should inform him about what’s happening.”

An incensed Enrile said: “So the command system of the AFP and PNP was paralyzed that day that’s why we lost 44 troopers.”

Catapang, his voice raised, defended himself: “The chain of command was not broken. The troops were on the ground. They were coordinating with (Getulio) Napeñas. These were decisions made by tactical commanders.”

Napeñas was the director of SAF during the conduct of the operation.

At the height of the encounter January 25 last year, Catapang headed to Zamboanga upon the instructions of President Aquino.

While the Mamasapano clash was happening, Aquino was in Zamboanga City to check on the bombing site there. Catapang said the President ordered him to proceed to Zamboanga “to discuss the bombing” that killed two persons.

“Discuss? Why? The Zamboanga bombing was over. What’s your priority as commander?”

Catapang explained that he was not aware about the “criticality of the situation.”

No request for helicopters

Earlier, Enrile told Catapang: “As a soldier you do not remove your boots. You must be prepared all the time, anytime, anywhere. Why did you not send air assets to cover these poor, beleaguered SAF troopers versus untrained elements?”

But he said “it took some time for the ground commander to react.”

Catapang said there were about two to three helicopters prepositioned in Cotabato ready for deployment but the PNP “did not request for the air assets.”

“My god, do you need a request?” an incensed Enrile asked the AFP chief.

Catapang retorted: “We follow the chain of command, your honor. The decision to use the helicopter was relegated to the tactical commanders. We don’t macromanage operations because if we do that, every time there are encounters, they will ask me what to do. Pangilinan was making the decision, the battalion commander, lieutenants; that’s their job. I can’t macromanage them.” IDL