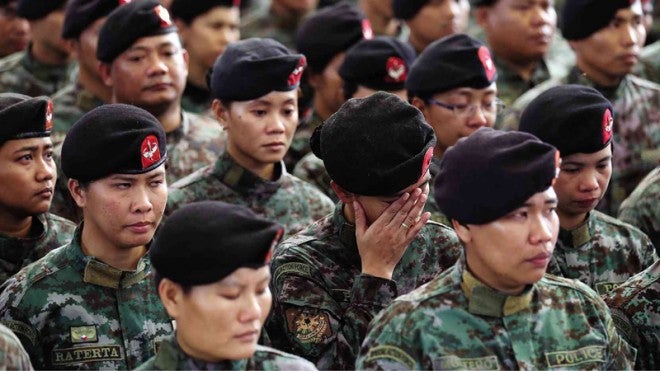 STILL HURTING A member of the Special Action Force wipes her tears as she and her comrades in the elite police unit attend a dialogue with Interior Secretary Mar Roxas at Camp Bagong Diwa in Bicutan, Taguig City, on the deaths of 44 SAF members during fighting last week with Moro rebels in Mamasapano town, Maguindanao province. RAFFY LERMMA

MANILA, Philippines–The Philippine Army was allegedly kept in the dark by the tactical commander of the elite Special Action Force (SAF) in the botched operation on Jan. 25 to arrest two top international terrorists, resulting in the massacre of 44 US-trained police commandos, the Inquirer has learned.

This conclusion will come out in the investigation report of the board of inquiry, convened following the carnage in Mamasapano town, Maguindanao province, that will be submitted by the Armed Forces of the Philippines to President Aquino next week. The AFP conducted its own investigation into why the military reinforcements came too late.

An expert on military operation planning procedure privy to the military investigation said the inquiry had concluded that the debacle was the fault of Philippine National Police Director Getulio Napeñas, the sacked SAF commander who kept the mission a secret.

The AFP inquiry, according to this source, said that several lapses were committed in the conduct of the operations against two “high-value targets”—the Malaysian bomb-maker Zulkifli bin Hir, alias “Marwan,” and his Filipino aide Basit Usman, with a combined bounty of $9 million on their heads.

The source gave the military version of what happened that fateful day as a result of the absence of coordination between the PNP and the AFP, both headed by President Aquino as Commander in Chief, as questions lingered on who gave final authorization for the mission:

On Jan. 25, about 3 a.m., 392 members of two SAF teams who were heading to Barangay (village) Pidsandawan in Mamasapano town were first stopped in an Army detachment checkpoint and were asked who they were. The two teams were headed by Insp. Ryan Pabalinas and Supt. Raymond Train. “Pulis kami, may lakad lang. (We’re from the police, we have a mission),” said one of the officers. They were then allowed to pass.

At 5 a.m., the 6th Infantry Division headed by Maj. Gen. Eduardo Pangilinan received a text message from Napeñas that Marwan had been killed.

At about 9 a.m., Pangilinan received a call from Lt. Gen. Rustico Guerrero, commander of the Western Mindanao Command, about the request for reinforcements from his “mistah” in the Philippine Military Academy, Deputy Director General Leonardo Espina, who was apparently not informed of the SAF operation. By that time, the team of Pabalinas had been wiped out.

The source said it was then that Pangilinan ordered his men to mobilize reinforcements for the embattled SAF commandos. The source said it usually took at least one hour to put together a rescue team because the troops were coming from different military detachments.

The reinforcement group, however, did not know where to proceed, as the SAF did not give grid coordinates. The source said the coordinates were important to prevent a misencounter, as the Moro rebels were also wearing fatigues. The reinforcing teams, who were trained to operate behind enemy lines, were at a loss as to where to look for the hapless SAF commandos.

“It’s like writing news. We also have the five Ws (who, what, where, when, why) and one H (how). If you do not have these, especially in the forest, your troops will be confused,” the source said.

The source said the radio frequency being used by the military was different from the police so there was no way the SAF could radio the military.

The military figured out the encounter site only after receiving an unknown call from a mobile phone of a member of Train’s team who was able to escape the carnage.

It was only then that the Army reinforcements got under way. The rescue force met one SAF company, which did not enter the marshland, and got the commandos out before the soldiers proceeded to the encounter site.

“Coordination means meeting in person and discussing the peculiarities of the operation. We call it SMESC (situation, mission execution, service support, command and signal). Nothing like that happened,” the source said.

As the reinforcement went to Train’s location, there was no one in the SAF who knew how to direct an artillery to identify target locations.

“There should have been a white phosphorous, or ammunition round that is delivered in order to mark a position. That’s the target reference, the call for fire procedure,” the source said.

The source also pointed out that there were only two SAF platoons of about 73 men who entered the marshland by foot. This means there were still 319 others who could provide reinforcement.

“So where is their reserve force of 300 plus who were also there? They should be the first reinforcement in that kind of situation. But it appeared they themselves were lost. Did they receive the radio report of their comrades? Nobody is asking what happened to the 300 plus at that time. That number is enough to give their comrades a fighting chance,” the source said.

The group of Inspector Pabalinas was positioned in the corn plantation while the Moro rebels had good positions.

“In short, they were surrounded in the cornfield. At the outset, they should have taken a vantage position, that’s what’s done in the battlefield. We call it cover and concealment. Before you go to that kind of mission, it’s a mountain, you should first identify your cover and how to conceal (yourself). Why was the enemy in a good position?” the source said.

That same day, Pangilinan went to Shariff Aguak to personally oversee the retrieval operations. There, he had an altercation with Napeñas who wanted to resume the retrieval of bodies the next day as it was

“We in the military respect the decision to give the mission to the PNP. We mourn the deaths of the SAF commandos,” the source said. “But don’t blame the military for the absence of reinforcements. You should understand what really happened on the ground.”

‘Aquino as commander-in-chief could have saved 44 SAF men’