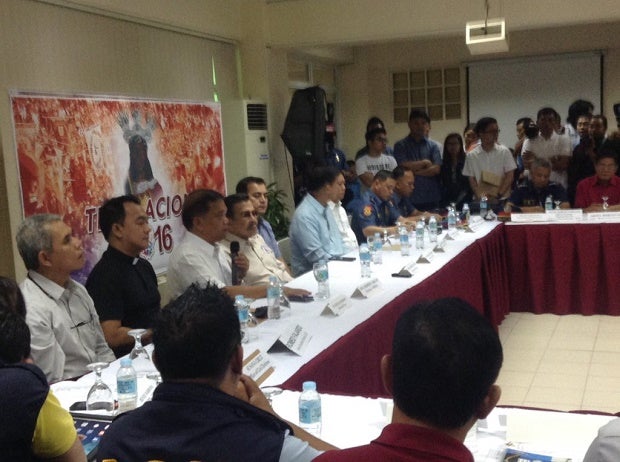 Government and church officials have assured the public that security measures will be at their tightest during the Black Nazarene procession on Saturday, which is expected to draw millions of devotees from all over the country. YUJI VINCENT GONZALES
INQUIRER.net

Government and church officials have assured the public that security measures will be at their tightest during the Black Nazarene procession on Saturday, which is expected to draw millions of devotees from all over the country.

The Quiapo parish church, which organizes the annual “traslacion” or grand procession of the Black Nazarene, has collaborated anew with the city of Manila and various national government agencies to ensure a “peaceful and meaningful” observance of the feast.

Manila Mayor Joseph Estrada, who is also the hermano mayor (grand marshal) of feast, said the local government’s role was focused on logistical preparations of the procession, and to ensure “peace, order, and cleanliness.”

PSSupt. Rhoderick Armamento, officer in charge of the Manila Police District’s (MPD) regional operations division, said an estimated 4,000 security personnel will be deployed at the Quirino Grandstand, Quiapo church, and along the seven-kilometer processional route on Jan. 9.

“We are adopting the best practices and the lessons we have learned from the Apec (Asia Pacific-Economic Cooperation) summit and the papal visit, which focused on the ‘whole of government’ approach. All government agencies in a national level were involved,” Armamento said in a press conference at the Pope Benedict building in Quiapo, Manila.

MPD Director Rolando Nana said they have not received any direct threat to the security of participants in the annual procession. However, he cited a “series of contingency plans” in worst case scenarios, such as bomb threats.

Metropolitan Manila Development Authority (MMDA) chairman Emerson Carlos said he would like to believe that his agency was already prepared in carrying out its task for the event after years of participation.

“We would like to believe na sanay na po tayo sa mga ginagawa natin (that we are used to what we have been doing),” he said. “We hope we could pull off a peaceful, safe, and orderly event.”

Aside from traffic management during the procession, Carlos said the MMDA will also be in charge of interagency command center in coordination with Quiapo church and other agencies, emergency and medical response, traffic engineering and disaster preparedness and response committee.