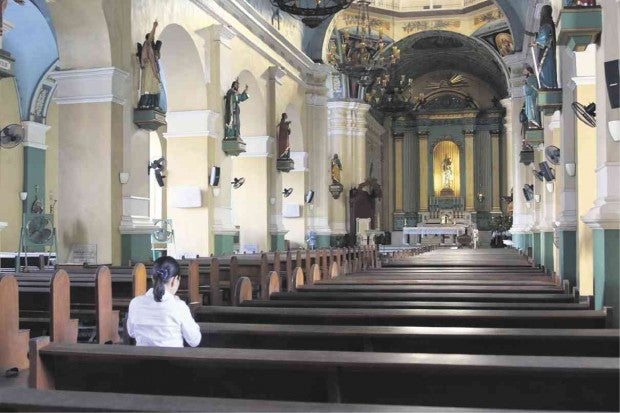 WHERE IT ALL BEGAN Sen. Grace Poe, a presidential candidate, finds solace at Jaro Metropolitan Cathedral in Iloilo City, where 47 years ago she was left as a newborn, with her biological parents unknown to this day. Detractors have filed disqualification cases against her on grounds that as a foundling she is not a natural-born Filipino and thus barred from running for President. CONTRIBUTED PHOTO

ILOILO CITY, Philippines—Sen. Grace Poe said on Thursday she planned to ask a family on Guimaras Island to undergo DNA testing to establish their claims she may be a blood relative.

“I just learned that I am supposed to have an aunt in Guimaras. I will be happy if that will be true,” she told reporters on the sidelines of a Senate inquiry on an attempted break-in at a radio station in Iloilo City by an alleged drug lord.

She said she had not talked to her supposed two sisters and aunt, identified as Lorena Rodriguez-Dechavez. She said that if there was a basis for their claim that they were her long-sought biological family “I would want them to undergo DNA testing, if they would allow it.”

Poe was reportedly abandoned and later found in the baptismal font at Jaro Cathedral in Iloilo City in 1968.

‘Silent all this time’

She said Poe was taken from their home in Buenavista town in Guimaras to Jaro District in Iloilo for adoption.

“We have been silent all this time because she was doing well. But we came out to defend and help her because her candidacy has been questioned,” she said.

Poe said it would a big help if Dechavez turned out to be her aunt, considering the length of time she has been looking for her biological family.

Questions on Poe’s biological roots have been used as basis for cases seeking her disqualification from running for President in next year’s election.

Poe has filed a motion for reconsideration on the decision of the first division of the Commission on Elections (Comelec) rejecting her candidacy.

“I know that this quest will not be easy. I’m ready. From what I see, it appears doubtful if the Comelec will decide in our favor. Let us just wait,” she said.

Read Next
‘Presidency is about character,’ Duterte told
EDITORS' PICK
The Best Tech Gifts For The 2022 Holidays
Pagasa: Warm, sunny Sunday in most parts of PH
Is it safe to talk politics again at family gatherings? ‘The Reconciliation Dinner’ shows us what that’s like
EDITORIAL: To a bike-friendly future
House energy committee chair Arroyo bats for cheap electricity
vivo’s coming to town to grant wishes with more holiday promos
MOST READ
LOOK: Vhong Navarro transferred to BJMP detention facility in Taguig
The Elephant Man in the Senate
Posh village as ‘shabu’ haven
LOOK: Zanjoe Marudo bonds with Ria Atayde, her family
Don't miss out on the latest news and information.