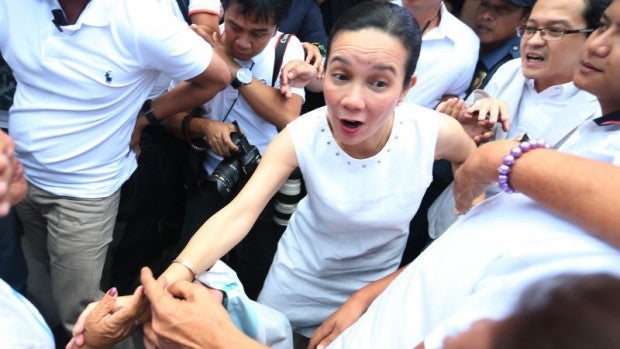 Presidential aspirant Grace Poe is mob by her supporters as she leaves after the hearing for disqualification case filed against her at the COMELEC en banc in Palacio Del Gobernador, Intramuros, Manila.
EDWIN BACASMAS/INQUIRER FILE PHOTO

Three more individuals from Iloilo have volunteered to undertake a DNA test to determine the parentage of Senator Grace Poe, her lawyer said on Tuesday.

Asked if the three had all volunteered to the test and if they all from the province of Iloilo, Garcia answered in affirmative to the questions.

Poe’s lawyer made this disclosure ahead of the Senate Electoral Tribunal’s expected decision Tuesday afternoon on a disqualification case filed against her by defeated senatorial bet Rizalito David.

David’s case seeks to disqualify Poe from the Senate over her citizenship. RAM