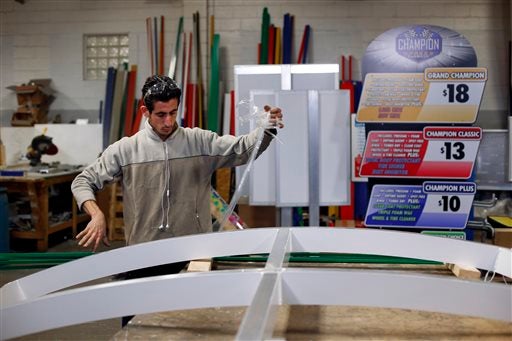 Syria refugee Nedal Al-Hayk works as a fabricator Monday, Nov. 16, 2015 in Warren, Mich. Several U.S. governors are threatening to halt efforts to allow Syrian refugees into their states in the aftermath of the coordinated attacks in Paris, though an immigration expert says they have no legal authority to do so. (AP Photo/Paul Sancya)

DETROIT — More than a dozen US governors have threatened to stop accepting Syrian refugees following last week’s attacks in Paris, even as experts counter they lack legal authority to block the relocations.

Meanwhile, President Barack Obama, whose administration recently pledged to accept about 10,000 Syrian refugees, argued Monday that the United States needs to allow them because many are fleeing terrorism.

Some state leaders disagree with Obama’s assertion the country can simultaneously welcome refugees seeking safety and ensure citizens’ security. Several have called for a complete halt to resettlement, others for temporary delays and a few seek more information from federal officials on the vetting process.

The Homeland Security Department says refugees face the highest level of security screening of anybody entering the US, but officials will work to allay states’ concerns.

Here’s a look at why some states are balking, what federal officials and refugee experts are saying and how the refugee resettlement process works.

What are the states’ primary concerns and what are they calling for?

Governors in many states, mainly Republicans, are responding to heightened concerns terrorists might use the refugees as cover to sneak across borders. Authorities said a Syrian passport was found near one of the attackers in Friday’s deadly attacks, and the Paris prosecutors’ office says fingerprints from the attacker match those of someone who passed through Greece in October.

The governors of several states are calling for the temporary suspension of accepting new refugees. Texas Gov. Greg Abbott ordered Texas’ refugee resettlement program not to accept any more Syrians and in a letter to Obama, the Republican also urged scrapping federal plans to accept more Syrian refugees into the country as a whole. He said the federal government can’t perform “proper security checks” on Syrians.

Arizona Gov. Doug Ducey called for an immediate halt and wrote he was “invoking our state’s right … to receive immediate consultation by federal authorities” to address the state’s concerns. Iowa’s Republican Gov. Terry Branstad acknowledged governors might lack authority but added he wants more information about refugee placement and the vetting process.

What do government officials and refugee experts say?

Lavinia Limon, president and CEO of the U.S. Committee for Refugees and Immigration, said under the Refugee Act of 1980 governors cannot legally block refugees. Each state has a refugee coordinator, a post created as part of that law, she said. Funded by the federal government, the post coordinates resettlement efforts with agencies such as hers and directs federal funds for refugees.

Westy Egmont, director of Boston College’s Immigrant Integration Lab, said the law previously withstood state challenges partly because the federal government has worked to equally distribute refugees being resettled. Some states have worked with resettlement agencies to limit new refugee arrivals to those with family ties to the community while families or individuals with no ties to a specific state have been sent to other locations with better prospects for jobs, housing and integration programs.

The Homeland Security Department says officials will continue to consult with states “to allay any concerns they may have” about security.

What exactly has Obama proposed?

Millions of Syrians have fled to neighboring Middle Eastern countries and Europe, and the Obama administration has pledged to accept about 10,000 Syrian refugees in the next 12 months. The State Department said the refugees would be spread nationwide, though many go on to places where they have family or cultural connections, such as Detroit, New York, Chicago or Los Angeles.

Obama said Monday the U.S. needs to continue to accept refugees from Syria because many are fleeing terrorism.

“Our nations can welcome refugees who are desperately seeking safety and ensure our own security,” he said. “We can and must do both.”

How does the refugee resettlement program work and how tight are the security background checks?

Refugees are generally invited to move to the United States after being referred to a State Department Resettlement Support Center by the United Nations High Commissioner for Refugees. In some cases they can be referred by a US embassy or non-governmental agency.

In other cases, potential refugees who are close relatives of people granted asylum in the US or other refugees already in the country can apply directly with the U.S. government to move here. However, they must “belong to specific groups set forth in statute or identified by the Department of State as being eligible for direct access to the program,” according to the State Department’s US Refugees Admission Program.

The average wait time for a refugee to be cleared to enter the U.S. is about two years, but often longer for people from Syria and elsewhere.

The Homeland Security Department said refugees being accepted into the United States are subject to the highest level of security screening of anyone coming to the US. TVJ