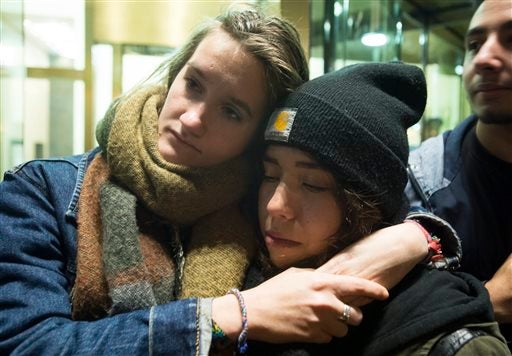 People attend a vigil outside the French consulate in Montreal, Friday, Nov. 13, 2015. Canadian Prime Minister Justin Trudeau offered “all of Canada’s support” to France on Friday night in the wake of “deeply worrying” terrorist attacks in Paris. AP

TORONTO — A Canadian provincial leader called on Prime Minister Justin Trudeau to suspend his plan to bring in 25,000 Syrian refugees by the end of the year, citing security concerns in the wake of the Paris attacks. But Canada’s health minister signaled Monday the Liberal government remains committed to the goal.

Trudeau, who was elected last month, campaigned on a plan to resettle 25,000 Syrian refugees by Jan. 1.

Brad Wall, the Conservative premier of Saskatchewan province, sent a letter to Trudeau on Monday saying the current “date-driven” plan should be scrapped. Wall argued that a rushed refugee resettlement could have devastating results and said there needs to be appropriate screening and security checks.

Trudeau, who was in Turkey on Monday for the Group of 20 summit, has given no indication that he will alter his refugee plan. His health minister, Jane Philpott, said the government is being mindful of health and security concerns while working to address the urgent refugee crisis.

Several U.S. governors are threatening to halt efforts to allow Syrian refugees into their states in the aftermath of the attacks, responding to heightened concerns that terrorists might use the refugees as cover to sneak across borders.

The government also has to determine where it will conduct health screenings; Philpott would not provide specifics Monday. TVJ