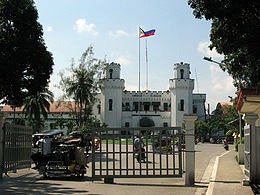 The Bureau of Corrections (BuCor) conducted another raid on Tuesday as part of their “Oplan Galugad” but this time, they have included in their raid the office of the jail guards at the medium security compound of the National Bilibid Prisons (NBP).

Also seized by the raiding team were 30 wooden paddles allegedly used by gangs inside the national penitentiary in the initiation of new members.

(We will conduct a deeper investigation here with regards involvement of jail guards in smuggling of contraband items.)

Initial report said six jail guards are being investigated after the raid though prison officials declined to elaborate on the matter.

Besides BuCor personnel, the raiding team also included members of the Philippine Army’s Explosive and Ordnance Division and K-9 units from the Philippine Drug Enforcement Agency.

The operation started early morning has targeted Camp Sampaguita, the medium security compound of the NBP housing some 6, 137 inmates serving prison sentences 10 years and below.

Ivler was convicted last month by the Quezon City Regional Trial Court and was sentenced to reclusion perpetua or 40 years imprisonment for the killing of Renato Ebarle Jr. in a road rage incident in Quezon City in 2009.

Roldan was also sentenced to reclusion perpetua for kidnapping then-three-year-old Kenshi Yu in 2005.

The raid was the seventh conducted by BuCor as part of its “Oplan Galugad.” TVJ