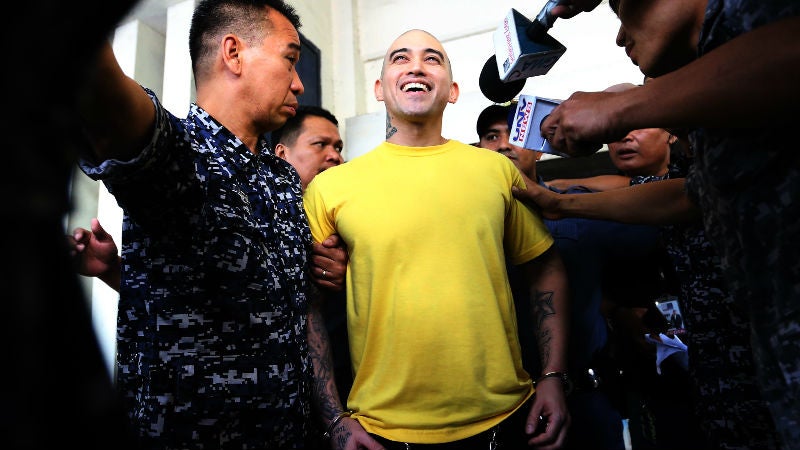 GUILTY VERDICT In handcuffs, Jason Ivler manages to laugh after a Quezon City judge sentenced him to reclusion perpetua, or 40 years in prison, for the killing of the son of a Malacañang official in a road rage incident. EDWIN BACASMAS

JASON Aguilar Ivler, a former member of the US Army and a nephew of folk singer Freddie Aguilar, was convicted of murder on Tuesday for the 2009 killing of the son of a former Malacañang official in what was described as a case of road rage shooting.
READ: QC court convicts Jason Ivler in murder of former Palace exec’s son

Judge Luisito Cortez of Quezon City Regional Trial Court Branch 84 sentenced Ivler to reclusion perpetua, or imprisonment of up to 40 years, for the death of Renato Victor Ebarle Jr.

Ivler said he was “somewhat” surprised by the court decision. “I didn’t think the Arroyo administration still has the power to put me behind bars. I think this is retribution for what happened to Mr. Nestor Ponce way back in 2004. For that, I apologize. But for this, I am not guilty,” he told reporters.

Ivler was referring to the death of former Malacañang adviser Nestor Ponce in a road accident in August 2004, for which he was convicted of reckless imprudence resulting in slight physical injuries. Ivler was also charged with homicide for not the same incident but the Supreme Court ruled that he could not be subjected to trial for double jeopardy.

Aguilar spoke to Ivler shortly after the decision was handed down. He tapped the shoulder of his 33-year-old nephew before Ivler was escorted out amid jostling cameramen and journalists.

“Tito, it’s OK. Don’t worry about me,” Aguilar quoted Ivler as telling him. The singer said Ivler had asked him to come to the promulgation. Ivler’s mother, Marlene, was not around.

“He (Ivler) apologized because my name is being dragged in this issue. I said nobody wanted this to happen and the truth will come out,” Aguilar said.

A policeman and another eyewitness identified Ivler in open court, testifying that he came out of his car and shot Ebarle after blocking the latter’s car in front of Barangay Valencia Hall in Santolan, Quezon City, around 11 p.m. on Nov. 18, 2009.

Ebarle, then 27 and a human resources officer at Manila Peninsula, was the son and namesake of Presidential Chief of Staff Undersecretary Renato Ebarle Sr.

Ivler fled the scene after shooting Ebarle at close range. He was later identified by the police after the SUV he was driving was traced to his stepfather Stephen Pollard, a British economist at the Asian Development Bank. Ivler is the son of folk singer Freddie Aguilar’s sister Marlene Aguilar.

A manhunt was launched for the “armed and dangerous” Filipino-American, with P1 million offered to anyone who could provide information leading to his arrest. This was after police failed to find him after raiding three houses in Quezon City in the same month.

Days after the killing, murder charges were filed against Ivler in the Quezon City prosecutor’s office. On Dec. 23, a Quezon City judge issued an arrest warrant, without bail, for Ivler.

Two months after going into hiding, Ivler was arrested on Jan. 18, 2010, inside his mother’s house at Blue Ridge, a subdivision in Quezon City. Ivler shot it out with National Bureau of Investigation agents, wounding two of them. He was shot but not killed.

Members of the Volunteers Against Crime and Corruption attended the promulgation.

Based on court records, part-time model Archie Castillo described the assailant as tall, good-looking, semi-kalbo (semi-bald), with a good build and a tattoo. Castillo was waiting for a ride home when he witnessed the shooting.

SPO3 Edgar Tiodin said he left Camp Crame around 11 p.m. and proceeded to Boni Serrano Avenue to buy a cola drink at a convenience store. Tiodin said a blue car, apparently the assailant’s, sped past his vehicle and overtook a gray car (the victim’s Toyota Cruiser).

Tiodin said he tried to chase the assailant in the blue car with Plate No. 20903 but lost him in a slum area in New Manila.

Ivler pleaded not guilty to the murder charge.

Cortez was the third judge to handle the case after the two previous judges were asked by the defense to inhibit themselves.

In May 2012, Ronan Masacupan, NBI ballistic examiner, told the court that the pistol found at Aguilar’s house, where Ivler was arrested, was the same firearm used to shoot Ebarle Jr.

In his court testimony, Masacupan said the bullets in the victim’s body, his Toyota Land Cruiser, and the one that got embedded in the wall of Aguilar’s house in the shoot-out, came from the same gun.

Ivler took the witness stand on June 9 this year, claiming that he was with his cousins that night and they went to a friend’s birthday party in Makati City. Diana Zandi, a defense witness, presented photos and said Ivler arrived at her party at 10:30 p.m. of Nov. 18, 2009.

“The court finds that foregoing testimonies of witnesses SPO3 Tiodin and Castillo should be given full credence absent any taint of ill-motive on their part to fabricate stories,” the decision said.

“The court is simply not persuaded by (Ivler’s) alibi,” the decision said.

The court ordered the branch clerk to prepare the records for an automatic appeal. Ivler’s preventive detention since January 2010 will be credited to his sentence. With reports from Ria Consuelo Mendoza and Krizia Jamille Yap, trainees; Inquirer Research; and Yuji Vincent Gonzales, Inquirer.net