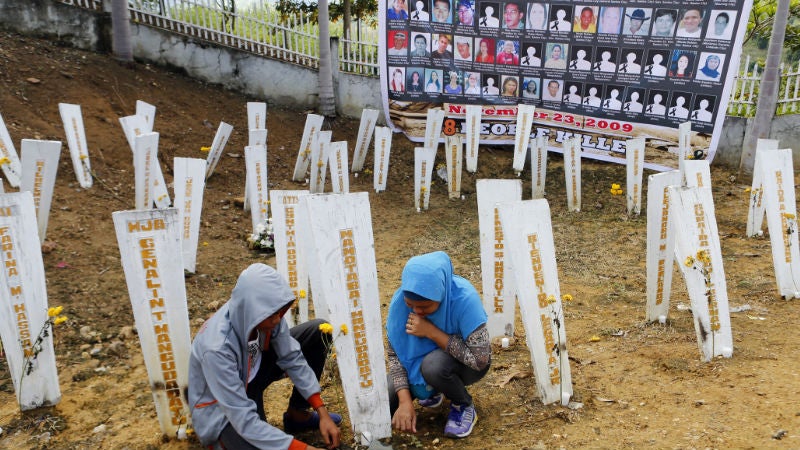 FLOWERS AND PRAYERS Relatives of the victims of the Maguindanao massacre offer prayers and flowers at the sixth anniversary of the massacre in Maguindanao province. The relatives deplore that no justice has still been gained for the victims despite President Aquino’s promise to resolve the case. JEOFFREY MAITEM/INQUIRER MINDANAO

SHARIFF AGUAK, Maguindanao—The list of candidates shows a diminishing number of the most familiar surname in local politics—Ampatuan—six years after the massacre of 58 people, 32 of them media workers, in the country’s worst election-related violence.

The family apparently chose not to field a gubernatorial candidate, and the list of the Commission on Elections (Comelec) showed only two Ampatuans out of 45 candidates for the Maguindanao provincial board—Sarip, the younger brother of the late Gov. Andal Ampatuan Sr., and Norodin, a nephew.

Also, no member of the family is listed among seven candidates vying for the vice gubernatorial post, against the incumbent, Lester Sinsuat. And not one of them is contesting the congressional post against Rep. Zajid Mangudadatu.

Lawyer Udtog Tago, Maguindanao provincial election supervisor, said candidates appeared to have learned their lessons from the past when elections were “ruled by political power and influence, rather than (being) a political exercise that is part of a democratic process.”

But in Shariff Aguak town, the nucleus of Ampatuan Sr.’s political glory proved to be too small a turf for his heirs and kin.

Among his late father’s coaccused, former Vice Gov. Sajid Islam Ampatuan, who is out on bail, is running for mayor of Shariff Aguak—against his two nephews, the brothers Marop Ampatuan, the incumbent mayor, and Akmad Ampatuan Jr.

Three out of six candidates for vice mayor are also surnamed Ampatuan, and only seven out of 34 candidates for the 10-seat municipal council are Ampatuans.

“The family probably realizes it is past its time, or is weak this time,” said a member of the Ampatuan family who did not want to be identified to evade the adverse effect of an “internal conflict” among them.

Indeed, some members of the family, who said they did not have anything to do with the massacre, have chosen to realign themselves with Gov. Esmael Mangudadatu. They include a younger brother of Ampatuan Sr. and two nephews.

Mangudadatu, whose wife and sister were among those killed in the massacre in Barangay Salman on Nov. 23, 2009, took over after winning in the May 2010 elections.

Currently, the province has a total voting population of more than 546,000, the biggest of the five provinces comprising the Autonomous Region in Muslim Mindanao (ARMM).

The province had been for five years—between 2004 and 2009—ruled by a confessed elementary school dropout, who tried and succeeded to some extent at blending traditional rule with democracy—unfortunately, by bending most of the rules, political observers say.

Presiding over his traditional council of political aspirants, Andal Sr. decided who should run and who should refrain from campaigning by simply citing napamagayunan—a Maguindanaon word for “consensus”—among his core of strategists, allies and religious advisers.

Defy that consensus and one ran the risk of bearing the brunt of the might of the entire local coalition.

But such was not the case in the Maguindanao massacre.

In 2009, talk circulated that Mangudadatu, then Buluan vice mayor, would run for governor, challenging the Ampatuans’ power.

Sukarno Badal, then the vice mayor of Sultan sa Barongis town and a close ally of the Ampatuans, testified in court that the plan to kill Mangudadatu was hatched in July 2009.

Mangudadatu learned about it so he sent his wife Genalyn, sister Eden and women relatives and followers to file his candidacy on that fateful day of Nov. 23.

Along with 32 other media workers, the Mangudadatu camp traveled to Shariff Aguak to file Esmael’s candidacy.

They never reached the town. They were blocked by gunmen, allegedly led by Datu Unsay Mayor Andal Ampatuan Jr., and brought to a village in Ampatuan town, where they were massacred.

Members of the Ampatuan clan who were implicated in the killings denied they were involved in the planning and execution of the killings. Andal Sr. died from lingering illnesses without admitting involvement in the massacre.

Hadji Ali Midtimbang, in a recent speech, said most, if not all of Andal Sr.’s allies among his close kin and friends, did not know it could happen and neither was there a hint that somebody could have plotted it.

Midtimbang, who will challenge Mangudadatu in the 2016 gubernatorial race, is the father-in-law of former ARMM Gov. Zaldy Uy Ampatuan who, with his siblings, has been detained at the Bicutan jail for allegedly plotting or conspiring the mass murders.

Once vice mayor and later mayor of Maganoy in 1986, Andal Sr. aimed for the governorship in May 2004. He soon pushed for the creation of more municipalities and for extended influence by designating mostly family members as local chief executives.

Many say it was a classic example of political gerrymandering.

From Maganoy, which he later renamed Shariff Aguak after his father, Andal Sr. gained control over the municipalities of Ampatuan, Datu Piang and Mamasapano.

He easily forged an alliance with the local leadership of nearby Sultan Sa Barongis. He then backed the creation of seven more municipalities

The Ampatuans lost to the Mangudadatus the support of the local leaderships of the municipalities of Ampatuan, Datu Piang, Datu Saudi Ampatuan, Datu Salibo, Datu Abdullah Sangki and Sultan Sumagka.

Mangudadatu, in an interview, said the Ampatuans still lord it over the towns of Mamasapano, Sultan sa Barongis, Datu Hoffer, Datu Anggal Midtimbang and Rajah Buayan.

“Of Maguindanao’s 36 towns, they still have influence, although minimal in some, in 17 towns,” Mangudadatu said.

For security purposes, the governor said, he visits the “Ampatuan-influenced” towns with the military.

“This is why my administration built several schools in these towns—to make sure that the children get proper education. It is through education that these children will grow up knowing that they can decide for themselves, that they can choose, through voting, their leaders,” Mangudadatu said.

“I know it’s a long process, but we have to start change.”

For Tago, one positive indication of changes was that from the 2010 voters’ list, the Comelec has purged more than 102,000 registrants in Maguindanao.

Under the biometrics technology of automated fingerprint identification system, Tago said the Comelec board of elections inspectors, which determines validity of and approves registry transfers, had invalidated only 36 applications, which were recorded only in one town—Shariff Aguak.

But as many were again enlisted from a new set of 106,000 registrants, correcting those who previously had the same fingerprints to several names, Tago added.