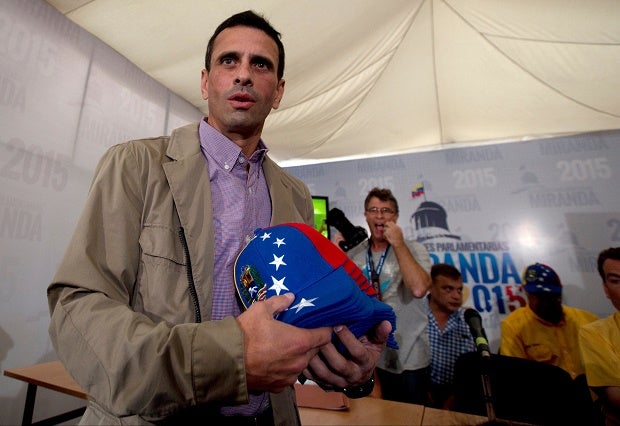 Leader of opposition party Primero Justicia, Henrique Capriles, who’s also governor of Miranda state, distributes to the press baseball caps decorated in the colors of Venezuelan’s flag, before giving a press conference at his office in Caracas, Venezuela, Monday, Dec. 7, 2015. In Sunday’s election, Venezuela’s opposition won control of the National Assembly by a landslide, stunning the ruling party and altering the balance of power 17 years after the late Hugo Chavez took power. AP Photo

CARACAS, Venezuela—Venezuela’s jubilant opposition vowed Monday to drag the oil-rich country out of its economic crisis and free political prisoners after it broke the socialist government’s 16-year grip on the legislature.

But analysts warned political struggles lie ahead for the center-right MUD coalition and its moral figurehead Lilian Tintori, if they want a break from the socialist “revolution” launched by late president Hugo Chavez.

The MUD, a broad coalition of dozens of parties, must stay united if it wants to press its advantage against Nicolas Maduro, the country’s mustachioed president and champion of “Chavismo.”

Despite his fiery campaign rhetoric, Maduro promptly conceded defeat in Sunday’s legislative election and called for “coexistence” between the opposition and his PSUV party, which lost control of the National Assembly for the first time since 1999.

He also called a party congress to consider reforms.

“It will be a debate on how we will move forward with more revolution,” said the president, whose closest regional ally is Communist Cuba.

“The counter-revolution (opposition) has had this victory in the National Assembly,” Maduro said at the presidential palace after meeting with leaders of his party.

“The situation is complicated. We have got to close ranks in a civilian-military alliance,” he stressed.

The MUD won 110 seats in the one-chamber assembly, the National Electoral Board said. The ruling socialist PSUV has 55, and two more are not yet decided.

The boiling tension of the past weeks of campaigning subsided into caution as Tintori and senior MUD leader Jesus Torrealba vowed their side did not want “revenge” or violence.

“We have an immense responsibility,” Torrealba said in an interview broadcast online.

“What happened yesterday was an electoral tsunami, but a vote of confidence is one thing and a blank check is something else,” he added.

“It is not the same thing uniting to resist and uniting to govern,” he said, calling on the diverse MUD to “reinvent” itself to “deal with the crisis.”

Tintori, the activist and wife of jailed opposition leader Leopoldo Lopez, appeared smiling in world newspapers Monday as she celebrated with supporters.

“I will not rest until all political prisoners are freed,” she said. “This is a historic day for Venezuela.”

International powers who have lobbied for change and voiced concerns for human rights in Venezuela hailed the result.

US Secretary of State John Kerry and EU foreign affairs chief Federica Mogherini each said Venezuelans had voted for “change” and called for constructive dialogue between the rivals.

“The people spoke and we expect the election results to be respected by all,” said Farhan Haq, a spokesman for UN Secretary-General Ban Ki-moon.

Hit by falling prices for the oil exports on which it relies, the country of 30 million is in an economic crisis, with shortages of basic foods and supplies.

It was unclear, however, how far the MUD will be able to force a change of course or even get rid of Maduro, as some have vowed.

Analysts were cautious about the prospects for change, particularly since the MUD has so far not made any detailed economic reform proposals. Its diverse members are chiefly united by their dislike of Maduro.

Some commentators cautioned that despite Maduro’s acknowledgement of the result, he would resist the opposition if it pushes for fiscal and economic reforms.

“Kudos to President Maduro and Chavismo for recognizing the results,” wrote David Smilde, a Venezuela specialist with the Washington Office on Latin America, a think tank.

Maduro’s vow to radicalize the revolution “doesn’t seem like a constructive reading of these results,” Smilde added, in a blog.

Political scientist Elsa Cardozo of Simon Bolivar University warned: “There is a very great risk that more difficulties in governing will arise, for the opposition just as much as for the government.”