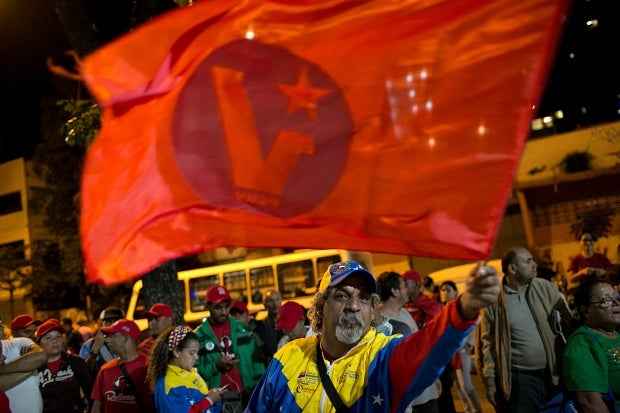 Pro-government supporters, one waiving a ruling party flag, demand that a polling station reopen after its official closing, during congressional elections in Caracas, Venezuela, Sunday, Dec. 6, 2015. Some members of the opposition are angry after elections officials ordered polling centers to stay open for an extra hour, even if no one was standing in line to vote. Government opponents mobbed some voting stations demanding that the National Guard stick to the original schedule of closing at 6 p.m. AP

CARACAS, Venezuela — Leaders of Venezuela’s opposition are celebrating victory ahead of official results in Sunday’s crucial legislative elections that could alter the country’s balance of power after 17 years of socialist rule.

Hours after polls closed, several opposition leaders took to the Internet to announce that their sources showed they had won a majority of seats in the National Assembly for the first time since 1998. Opposition supporters were seen celebrating. But with no official results released and the ruling socialist party not commenting, their claims could not be confirmed.

President Nicolas Maduro had repeatedly vowed in recent weeks to take to the streets and defend the socialist system build by his mentor the late President Hugo Chavez if his party lost, though on Sunday, he appeared to change his tone.

“In Venezuela, peace and democracy must reign,” he said after voting in a working-class neighborhood of Caracas. “I’ve said we’ll take the fight to the streets, but maybe I was wrong. We can’t go where we’ve always been.”

If confirmed, it would be the opposition’s first major electoral victory since Chavez became president, with Venezuelans tired of rampant crime, routine shortages of basic goods and inflation pushing well into triple digits. The economic crisis has worsened with this year’s slump in oil revenue, which funds almost all public spending.

Voting proceeded mostly peacefully through the day, though fears of unrest prompted some Venezuelans to line up before dawn so they could cast their ballots and get off the streets.

Alejandro Ramirez spent the day riding around to polling centers with a motorcycle gang to encourage government supporters to vote. “We must never let the right wing win here,” he said as his group ringed a voting center in the pro-government stronghold 23 de Enero, as pro-Chavez salsa songs filled the street.

As voting wound down, several ruling party governors were caught on film braving boos and insults as they entered their polling places, including Chavez’s brother Adan.

READ: Venezuela’s Chavez lives on, but some voters move on

Electoral authorities extended voting hours for an additional hour amid heavy turnout. Under Venezuelan law, polls must remain open as long as voters are in line waiting to cast ballots. Government opponents faced off with armed soldiers, and later, groups of red-clad government supporters on motorcycles.

Earlier in the day, electoral authorities suspended the credentials for former Bolivian President Jorge Quiroga, one of six conservative former presidents invited by the opposition to monitor the election, for controversial comments seen as interfering in the voting process.

A small opposition majority in the new 167-seat National Assembly could create only minor inconveniences for Maduro, such as denying him a budget for foreign travel and having committees scrutinize the executive’s record. Some hardliners are also vowing to seek a recall referendum to cut short Maduro’s term before it ends in 2019.

Reining in Maduro, who became president after Chavez died in 2013, would require new laws needing at least a three-fifths majority, or 101 seats — two more than now held by the socialists. Maduro’s near-complete grip on other branches of government like the Supreme Court mean he can easily outflank a hostile congress.

A source in the anti-government camp who spoke on the condition of anonymity because results were not yet official told The Associated Press the opposition had won 100 seats.

The opposition, with little cash and little access to broadcast media, has struggled to compete in far-flung rural districts against the government’s campaign machine. In 2010, voting nationwide was almost evenly split yet the government ended up seating 33 more lawmakers due to Venezuela’s complicated electoral system.

Still, even a small victory would provide an important lift to the frequently outmaneuvered opposition. The socialist party has often touted its unbroken chain of electoral victories over the past 17 years to defend itself against allegations that it’s undemocratic.

Yosmeli Teran is one of the former supporters of the socialist party whose abstention this time around is believed to be one of the biggest contributors to the oppositions’ strength.

Drinking rum at an informal street party, she resisted her neighbors’ pleas to vote.

“This is a slum. I know it will never be a safe place. But if it could just be a little less violent. And if it could be a little easier to feed and clothe my son,” she said.