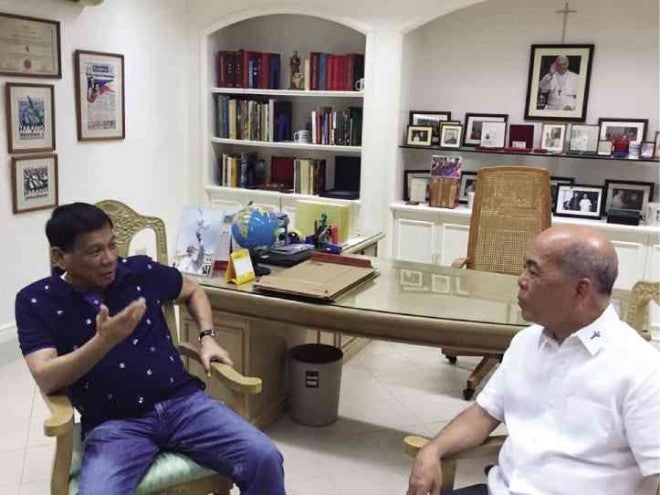 DAVAO CITY, Philippines—Mayor Rodrigo Duterte has named the priest who allegedly molested him and several other high school boys when he was a teenager studying at the Jesuit-run Ateneo de Davao University (AdDU) here.

BACKSTORY: Duterte names priest who allegedly molested him as teen

Duterte said the sexual abuser was the late Fr. Mark Falvey, SJ, one of the Jesuit priests at AdDU, and that the abuse happened once when he was a high school freshman in 1956. And he spelled out the name of the American Jesuit priest.

“It happened during our generation, two years ahead of us and two years following us,” Duterte told reporters here late Thursday.

“It was a case of fondling, you know, during confession, that’s how we lost our innocence early,” he said.

“It was a sort of sexual awakening for each of us. We realized quite early that ganun talaga ang buhay (life is really like that),” Duterte said.

He said Falvey was later involved in a payout amounting to P25 million in the United States after a number of his victims filed a case against him.

Fr. Nono Alfonso, SJ, the liaison officer of the Society of Jesus in the Philippines, said the Jesuits were sad if the alleged abuse had happened, as “we are an educational institution and there is no room for wolves in sheep’s clothing.”

He said it was the first time that he heard of the name of the priest that Duterte said had sexually molested him and other students at AdDU in the 1950s.

Alfonso said he would have to “do some archival work as it happened long ago.”

“We still have to check if he was a real person but with due respect to Mayor Duterte, under the protocol, you have to formally file a case but if the mayor is no longer interested, we can no longer do anything about it,” he said in a phone interview.

“But we certainly have to look into this because we are in the business of education and we could not tolerate something like this to happen within our institution,” Alfonso added.

In a television interview later, Alfonso said Duterte did not finish high school or elementary school at   Ateneo de Davao and that they were still checking when he studied in the school.

Duterte said he did not file a case because he was still a young boy at the time, and was afraid.

“How could we complain? We were all afraid,” he said.

Duterte would not say anything more as he said he had promised his priestly friends that he would keep his mouth shut until after he had talked with Davao Archbishop Romulo Valles today.

“I’m willing to talk to Bishop Valles because he’s the leader of the flock here. I don’t have a quarrel with the Church, although I have already apologized, other bishops came in very strong, so I better stop talking,” he said.

In the two-hour, expletive-laced speech that he delivered during his proclamation as the PDP-Laban presidential candidate last week, Duterte shocked many when he cursed Pope Francis for the heavy traffic triggered by the papal visit last January.

After he was roundly criticized by priests and bishops for his attack on Pope Francis, he warned the prelates that if they did not stop their tirades, he would open his mouth and reveal secrets that would “destroy the Church and the present status of some priests.”

“There are so many secrets that we kept as children. Do not force me because this religion is not so sacred,” he warned.

In his talk with reporters on Thursday, Duterte explained that his “joke,” which appears to have drawn the entire Church hierarchy against him, was not really intended against Pope Francis, it was against the government for failing   to solve the problem of traffic congestion in the country.

“I’m a member of the Catholic Church, I haven’t changed religions, I only have one God, I just like to honor the request of my friends who are priests that the bishop would like to talk to me. He’s still my bishop, I cannot do anything else, it would be foolhardy for me to be still combative,” he said.

In a telephone interview following their hourlong meeting at the Bishop’s Palace, Valles said Duterte apologized and promised to mend his ways.

“I was satisfied and happy about the meeting because he showed he is really sincere [about] his apology,” said Valles.

Duterte was accompanied by Msgr. Paul Cuison and Duterte’s close aide, Bong Go, during the meeting with Valles and Bishop George Rimando to explain the context of his controversial statements last Monday.

“The mayor asked for forgiveness for the unintended hurt he caused to Pope Francis and the whole Catholic Church,” Go told the Inquirer in a telephone interview.

Valles said Duterte promised to stop uttering expletives for the entire duration of the election campaign and would pay the fine of P1,000 for “every slip of the tongue” to Caritas Davao.

“It was not part of our conversation, but I heard him tell reporters about the fine,” Valles said.

In a statement after his meeting with Valles, Duterte said he admitted that he said “something bad about the Pope.”

He said he was “admonished by the monsignor and was given a little lecture on Christian values.”

“The monsignor told me that I have to be very careful (with what I say),” he said.

From now on, “I will have to be careful with my mouth as much as possible,” he said.

And as he vowed to practice “guarded talk,” he said he would fine himself P1,000 for each cuss word he uttered during the campaign.

He told reporters to do the counting for him.

But even before the interview was over, Duterte had already uttered two cuss words.

Before leaving the Bishop’s Palace, Duterte went to the Caritas office (which was in the same building) to turn over his self-imposed fine for cursing.

Duterte said he would try to avoid foul language in his public engagements as he campaigned for the presidency. And he promised not to curse when he became President.

“You can now call me Santo Rodrigo,” he said. With Nico Alconaba and Nancy Carvajal