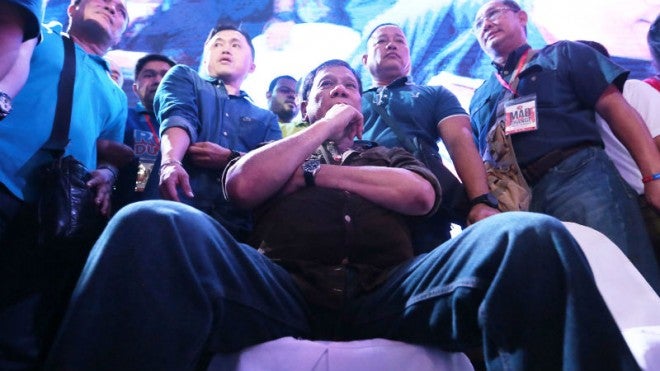 This was Mayor Rodrigo Duterte’s statement minutes after an hour-long meeting with Davao Archbishop Romulo Valles on Friday afternoon.

Admitting that he said “something bad about the Pope,” Duterte said he was “admonished by the monsignor and was given a little lecture on Christian values.”

“The monsignor told me that I have to be very careful (with what I say),” Duterte said.

The tough-talking mayor said from now on, “I will have to be careful with my mouth as much as possible.”

And as he vowed to practice “guarded talk,” he said he will fine himself P1,000 for each curse word he would utter.

He even urged reporters to do the counting for him.

The fine would be given to the Catholic Church’s charitable body Caritas.

But even before the ambush interview with Duterte was over, he uttered two curse words.

Before leaving the Bishop’s Palace, Duterte went to the Caritas office (also in the same building) to turn over his self-imposed fine for cursing.

Duterte said he will try to avoid speaking foul language in his public engagements as he campaigns for the presidency. And, he even promised not to curse when he becomes one.

“You can now call me Santo Rodrigo,” he said.

Valles, on the other hand, refused to divulge what was discussed in the meeting with the mayor.

He said the mayor made the initiative to meet with him.