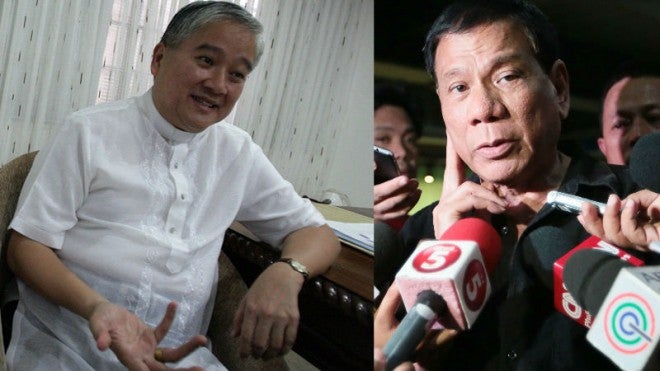 “When a revered and loved and admired man like Pope Francis is cursed by a political candidate and the audience laugh, I can only bow my head and grieve in great shame. My countrymen have gone to the dregs,” said the president of the Catholic Bishops’ Conference of the Philippines (CBCP).

READ: Archbishop hits Duterte: Corruption is a devil with many faces

In an interview with reporters on Tuesday, Duterte warned the prelates against continuing tirades against him.

“I will destroy the Church and the present status of so many priests and what they are doing,” he said. “You priests, bishops, you condemn me and suggest I withdraw, but then I will start to open my mouth. There are so many secrets that we kept as children. Do not force (me to speak) because this religion is not so sacred.”

He said he was among the victims of child abuse by priests.

“If they want, they can start it and I’ll tell everything. From my years in Ateneo [de Davao] until we grew up, and it will make them sad, very sad,” he said. “They have secrets, I have secrets.” He stressed his comment on the Pope was “inadvertence.”

“Vulgarity is corruption. When we find vulgarity funny, we have really become beastly and barbaric as a people.”

Villegas issued the statement a day after Duterte, during his proclamation as the official presidential candidate of PDP-Laban in next year’s elections, gave a speech where he cursed Pope Francis for the heavy traffic triggered by the papal visit in January.

Duterte pointed out he did not feel he owed anybody an apology. “It was not intended for the Pope.”

He further pointed out that he has no plan of even reducing his habit of cussing. “No. I will not. P*ina ayoko (I will not). We are all the creations of God. We have God-given talents. The talent that God gave me is cussing. Instead of blaming me, blame God because He created me.”

In a statement issued on Tuesday, Duterte said: “It was my expression of anger borne out of the helplessness of the millions of commuters suffering from this daily gridlock. It was never intended to be directed to the person of his holiness Pope Francis, who has my utmost respect.”

“What the world desperately needs now is leadership by example. We have so many leaders in office and many more aspiring to sit in office but are they examples of good citizenship? If the leaders we choose are to be leaders for national progress they must be visionaries and exemplary,” he added.

In a nationally televised speech on Monday, Duterte said he was trapped in traffic in Manila for five hours during the papal visit. When he was told the roads were closed, he said he felt like calling the Pontiff to say: “Pope, (expletive), go home. Don’t visit us.” The remark elicited laughter from the audience.

Duterte went to TV5 during its newscast last night to give what he said was a “context” to his remarks. He complained that while trapped in his car, he had to urinate in a plastic bottle. He said he did not want to relieve himself in the street. If the Vatican feels offended by his remarks, he said, it can call for his disqualification and he will give up his quest for the presidency and go back to his Davao hometown.

Msgr. Paul Cuison, vicar general of the archdiocese of Davao, told reporters on Tuesday he had received many negative text messages on Duterte’s remarks. “When I viewed the video, I noticed that the curse was directed at the heavy traffic and the sacrifice of the people and not the Pope,” he said. “I do not believe Digong will ever show disrespect to the Pope,” he said, using Duterte’s nickname.

Sen. Alan Peter Cayetano also acted as Duterte’s apologist saying that the Davao City mayor never really cussed Pope Francis and that it could not be helped that it was the PDP-Laban standard bearer’s way of expressing his frustration at the government for inconveniencing people.

“Mayor Duterte explained to us that people from the Visayas usually tend to literally translate in Filipino how they would say things in their dialect which result in getting their meaning lost in translation. So if most people think that he cussed at the Pope, sorry but Mayor Duterte really did not mean to offend, did not mean to come across that he was cursing the Pope,” he explained.

“If that is how he speaks, we ask for understanding. It is really an expression of frustration … You just have to understand, Mr. Duterte has a different way of communicating to people,” Cayetano pointed out.

He said that Duterte’s coarse manner of speech and action still needs getting used to, “You should believe that he will really do something but do not take it (his words) literally.”

During his proclamation, Duterte rambled on for two hours, talking about how he planned to lead the country on the road to federalism, get rid of corruption, criminality and the drug menace. He talked about having two wives and two girlfriends, drawing laughter from his audience during the nationally televised event. He also said he got rid of kidnappers and rapists.

“Corruption is indeed a great scourge of Philippine politics,” Villegas said in his statement.

Without directly accusing Duterte, Villegas referred to murder and adultery—two things apparently associated with Duterte. “Killing people is corruption. Killing is a crime and a sin whether it is done by criminals or public officials no matter what the intention,” the prelate said.

“Adultery is corruption. It makes married love cheap and uses people for pleasure. Adultery corrupts the family; it destroys children and victimizes the weak,” Villegas added.

In a statement, Gabriela secretary general Joms Salvador said that womanizing and treating women as mere objects are an “affront to women and should not be flaunted.”

“This reeks of machismo, reinforces society’s low regard of women and consequently heightens women’s vulnerability to violence and abuse. [It] is both distasteful and unacceptable,” Salvador said. With reports from Gabriel Cardinoza, Inquirer Northern Luzon; Allan Nawal, Inquirer Mindanao; Jovic Yee and Nancy C. Carvajal