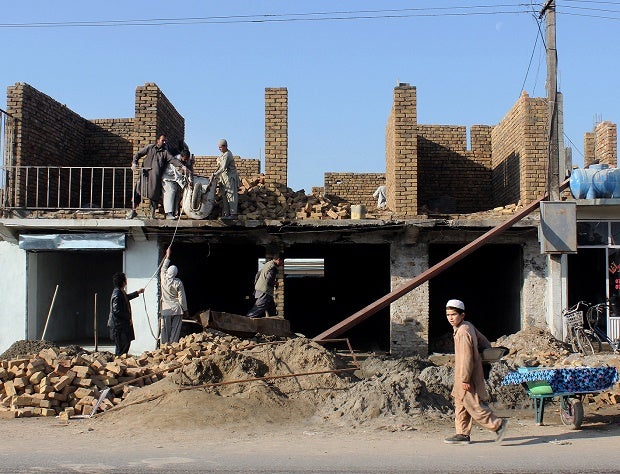 In this Tuesday, Dec. 1, 2015, photo, Afghan laborers rebuild a destroyed shop in Kunduz city, north of Kabul, Afghanistan. Two months after the Taliban rampaged through the northern Afghan city of Kunduz, residents are still sifting through the rubble, wondering how they will ever rebuild and worrying that the insurgents will return. AP

KUNDUZ, Afghanistan — Two months after the Taliban rampaged through the northern Afghan city of Kunduz, residents are still sifting through the rubble, wondering how they will ever rebuild and worrying that the insurgents will return.

The Taliban swept into the strategic northern city in late September, holding it for three days and looting and destroying shops before being driven out by a massive counteroffensive backed by US airstrikes.

The street by street fighting devastated wide swaths of Kunduz at a time when Afghanistan’s finances are stretched thin by a seemingly never-ending war. International aid is being scaled down alongside the withdrawal of most foreign troops, who officially concluded their combat mission last year.

The Taliban are meanwhile dug in on the city’s outskirts, and many fear they could return.

“I lost everything I had — my house, my business and my property,” said Ahmad Jan, who sold TVs and DVDs in Kunduz. The Taliban torched his shop, and then his home was demolished during the battle to drive them out, he said. He moved his family to a neighboring province for safety.

“I can’t trust the government anymore, I have lost my hope in them,” he said.

During a visit to Kunduz last week, Afghan President Ashraf Ghani said the government would protect the city and help residents rebuild. “We won’t allow a repeat of what happened to Kunduz,” he said, as rocket-fire rumbled off in the distance, where near-daily battles have erupted just outside the city.

Ghani has ordered the dismissal and military trial of an undisclosed number of intelligence officials, including the provincial intelligence chief, over the failure to anticipate September’s attack, which was the latest in a series of attacks on the city. He has also ordered a security review by the newly appointed army division commander.

But many residents said they remain fearful, especially after seeing the Taliban make off with armored vehicles and tanks.

As winter sets in, local officials and residents are taking stock of the devastation wrought by the fighting. The damage to public infrastructure alone has been estimated at around $82 million, according to Hamdullah Danishi, the acting governor of Kunduz province.

He said the damage to private property is still being assessed. “It could be that the cost of rebuilding privately owned properties will be several times that of the public infrastructure because they took the brunt of the fighting over several days,” he added.

Zabihullah Majidi, a civil society activist in Kunduz, said the fighting destroyed hundreds of shops and homes, including high-rise apartment buildings. Much of the city is still without water or electricity. Half the city’s 300,000 residents fled during the fighting, and it’s unclear how many have returned.

“The cost of reconstruction will probably be less than it was after the last war with the Taliban, but substantial nevertheless,” he said, referring to the 2001 US-led invasion that toppled the Taliban.

Among the facilities destroyed in the fighting was a trauma hospital operated by Doctors Without Borders, which was the target of a sustained US air assault that killed at least 30 people and sparked an international outcry. US President Barack Obama apologized for the attack, which came at the request of Afghan forces.

Just next door to the hospital was the warehouse where Abdul Maroof stored electronic goods for his trading company. The attack on the hospital destroyed the building and everything inside, causing hundreds of thousands of dollars in losses and leaving him unable to pay back loans, he said.

“From an economic point of view, I can assure you that for the next five years our Kunduz cannot be the same as it was in the past,” he said, adding that many businessmen have quit the town, fearing another attack.

Shopkeeper Sardar Agha said at least 10 shops on his street were destroyed during heavy fighting, estimating that the owners lost hundreds of thousands of dollars. “There’s nothing left. Many shops and homes in my neighborhood have been destroyed or hugely damaged,” he said.

The acting spokesman for the governor of Kunduz, Abdul Wasi Basel, said the top priority was security, followed by restoring water, electricity and other services. Only then, he said, would government offices be rebuilt.

A commission has been set up to process applications for the recovery of damaged or destroyed assets, but Basel could not say when funds will be dispersed. “The exact cost of the war is difficult to say at moment,” he said.

Mohammad Khan Almas watched as his neighborhood was transformed into one of the main battlefields in the city and airstrikes destroyed eight shops he owned. The $1,200 worth of monthly rent he had collected from them supported his family, including his 11 children.

He said a delegation from the governor visited and assessed his losses at $320,000, but until now he’s received no money.

“There are three culprits here — the government, the Taliban and the United States,” he said. “They are all guilty of the incidents that ended my business and destroyed my shops.”