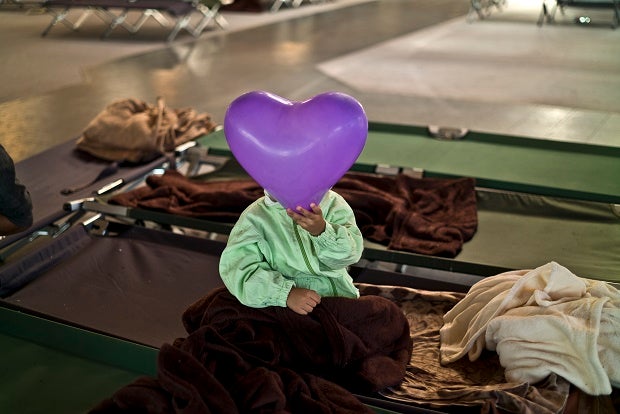 In this Tuesday, Sept. 22, 2015, file photo, an Afghan refugee child covers his face with a balloon while he and other migrants spent the night in a shelter near Graz, Austria. Afghans make up the second largest nationality — after Syrians — arriving on Europe’s shores, accounting for nearly a fifth of total arrivals, according to the UN. AP FILE PHOTO

KABUL, Afghanistan — As a recent high school graduate from a middle-class Kabul family, Mohammed Fahim Aazar has the means to go to college and pursue a profession in Afghanistan, but instead he’s acquired a $5,600 visa and a plane ticket to Turkey, where he will embark on the migrant trail to Europe.

The 19-year-old said he has had enough of his country’s never-ending wars and dismal job prospects. “Every day there is another suicide attack, and when a person leaves his house he cannot be sure he will make it back alive.”

Bound for far-off Finland, he’s joining the largest wave of global migrants and refugees since World War II, hundreds of thousands of people seeking a better life in Europe. Afghans make up the second largest nationality — after Syrians — arriving on Europe’s shores, accounting for nearly a fifth of total arrivals, according to the UN

Their flight is driven by despair in a country that remains mired in war and poverty despite a 14-year US-led intervention and billions of dollars in international aid. And their ranks include middle and upper-class Afghans with skills needed to rebuild the war-torn country.

“Even those who are working or studying are not sure they will be able to change the future of Afghanistan — it is not possible,” Aazar said. “Everyone has lost hope and trust in this country and that is why they leave.” He calls his own decision to depart a “matter of life or death.”

He paid for the visa and plane ticket by using a parcel of land as collateral for a loan. He plans to meet up with friends who will help him with the trip to northern Europe.

In the years after the 2001 invasion that toppled the Taliban, more than 5.8 million Afghans returned home, but the rate of return slowed five years ago, according to the UN refugee agency, as the insurgents regrouped and reconstruction stalled. Over the past two years, as the US and NATO withdrew most of their forces and the Taliban advanced, aid and investment dried up, leaving few opportunities even for educated Afghans.

Unemployment hovers at 24 percent, according to the Ministry of Work and Social Affairs, as once-promising industries like mining have been crippled by the unrest and lack of investment.

An estimated 120,000 Afghans have left so far this year, according to Hossain Alemi Balkhi, the minister for refugees and repatriation. He expects that number to reach 160,000 by the end of the year, four times the number who departed in 2013.

Among them are educated Afghans who had fled previous bouts of violence but returned when things appeared more hopeful. Mohsen Hossaini, an artist and performer, fled war with his family as a child, but came back after the fall of the Taliban in 2001.

He welcomed the election last year of President Ashraf Ghani, an American-educated technocrat whose daughter is an artist in New York. But Ghani has yet to deliver on promises of peace and jobs.

“I have tried very hard to stay here in Afghanistan, but I cannot.” Hossaini said at a garden cafe in Kabul last month, the day before he left on a flight for Norway with his wife and two sons, 12 and two years old.

He recalls a suicide bombing in central Kabul in 2011, and how he and his son were trapped at the scene when police shut down the surrounding roads.

“I was in Iran for 20 years and I blamed my parents for not providing a better life for us,” he said. “Now that I am a father I realize this is not a good place for my children.”

Balkhi, the minister for refugees, says ominous news from the front-lines in recent months may have hastened people’s decision to leave. The Taliban briefly seized the northern city of Kunduz in September in their biggest foray into an urban area since 2001, and militants loyal to the Islamic State have a growing presence in the east, where they have waged turf wars with the police and the Taliban.

He said US President Barack Obama’s announcement that 9,800 US soldiers would remain in the country through next year, instead of halving the number as originally planned, provided some reassurance.

But those who have left say the country’s problems extend far beyond security, to a corrupt government, thuggish local warlords and a deeply-rooted Islamic conservatism that limits freedoms.

Shekib Mosadeq left five years ago and now lives in Berlin with his wife and daughter. They come from the relatively safe city of Herat in the country’s far west, where he sang in a rock band called The Ants.

“We sang songs that were very anti-government, anti-Taliban, anti-warlords,” he said during a brief return to Kabul to produce a CD of songs about the migrant experience.

“Even though the threats were a problem for me, I could have found a way to live with them, but frankly it was not right that my daughter should be threatened, too,” Mosadeq said. “Now, in Germany, she is having the childhood that I never had.”

With a visa that allows him to live and work in 26 European countries, Mosadeq can come and go. But he has no plans to return to Afghanistan permanently.

“Everything that we achieved in the years after 2001 — freedom of speech, cultural development, education and rights for women — is disappearing,” he said.

“Our leaders and those who use Afghanistan as a battleground for their own strategic aims don’t think about us, about young people who have the ability and the desire to do something for their country. So we are leaving. That’s it.”