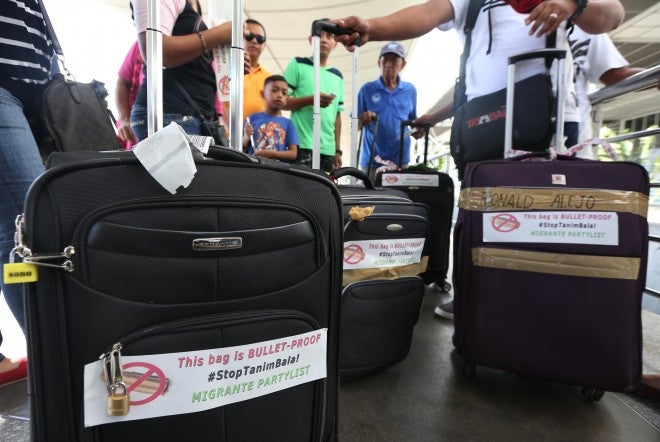 Stickers bearing “Stop Tanim Bala” warnings are handed out to passengers entering the NAIA Terminal 2, in Pasay City, by militant group Migrante to discourage anyone from planting bullets in their baggages. MARIANNE BERMUDEZ

All involved in the operations of the Ninoy Aquino International Airport (Naia) will be subjected to the investigation of the National Bureau of Investigation (NBI) in connection with bullet-planting incidents at the airport, Department of Justice (DOJ) Spokesman Emmanuel Caparas said at a press conference.

“Initially, all those that are involved in the operations will be investigated,” Caparas told reporters Wednesday.

Based on the order, the NBI Special Task Force is ordered to evaluate all documents including video and audio recordings; conduct interviews with all individuals involved and execute sworn affidavits.

“Based on the evidence gathered, the team shall submit, identify, formulate and file appropriate criminal and/or administrative charges against those found to be involved or to have participated in the TaLaBa scam,” the DO stated.

Caguioa gave the task force 15 days to submit a report on their investigation. IDL