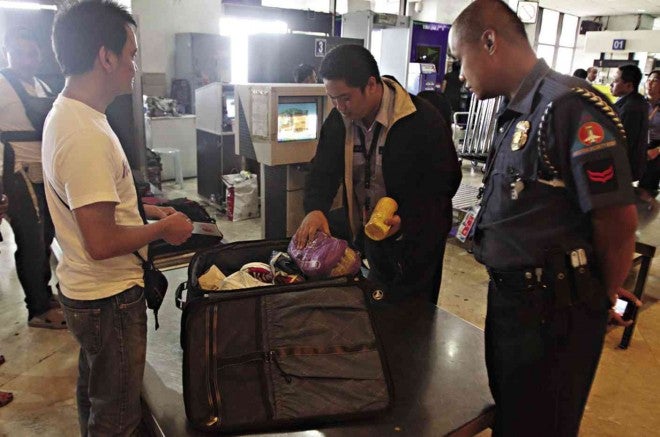 What used to be a routine procedure at Naia is now viewed with suspicion. INQUIRER PHOTO

More lawmakers and a migrant labor advocacy leader joined calls for a formal investigation into the so-called “laglag-bala” or “tanim-bala” scam at the Ninoy Aquino International Airport (Naia), where a growing list of passengers caught carrying one or two bullets in their bags has given rise to allegations that security inspectors had placed those contraband items as part of an extortion racket.

Sen. Miriam Defensor Santiago said the Senate should consider creating a task force that will investigate the alleged scheme and recommend sanctions against those involved.

“We in Congress must also ensure that Republic Act No. 10591 otherwise known as the Comprehensive Firearms and Ammunition Act, is properly implemented and not abused by enforcers of the law,” she said in a resolution filed Friday. “The perpetrators of the alleged scam are brazen perhaps because they know they will not be punished. We must prove them wrong.”

Santiago, who is running for President in the 2016 elections, was the third senator after Ralph Recto and Nancy Binay to formally call for an investigation.

Recto, the Senate president pro tempore, said the Senate should revisit the law that metes out the same penalty—six years imprisonment—whether the perpetrator was found carrying one round or a truckload of ammo. This provision, he said, makes it tempting for rogue airport security personnel to plant even just one bullet in the luggage of passengers.

Binay, meanwhile, cited reports that tanim-bala activities had been rampant at Naia terminals since 2005.

Santiago cited the online petition launched on the website Change.org condemning the alleged scam that has led to the filing of criminal charges against the “victims,” such as overseas Filipino workers and tourists.

Among the latest was Gloria Ortinez, an OFW bound for Hong Kong, who was detained for two days for illegal possession of ammunition. She was eventually freed after a court cited a discrepancy in the evidence presented against her.

“The reports highlight how corruption defeats the purpose of law enforcement. Second, they raise a legitimate question on the implementation of the law on the illegal possession of ammunition. Finally, they underline inaction on the part of government,” said Santiago.

Meanwhile, Sen. Alan Peter Cayetano said airport officials should step down from their posts if they fail to curb such activities. “If they cannot catch the culprits and put them in jail within 48 hours, then the best call is for them to resign from their posts.”

Airport officials should have first launched a comprehensive investigation of the recent “bullet-planting incident” involving Ortinez before sending her to inquest proceedings. “This is an unacceptable conduct toward an OFW who has no police record and is fully aware of restrictions for air travel. Authorities should exercise zero tolerance over these harassment cases,” he said.

“Any charge against a person for having a bullet in his or her possession should always be supported by uninterrupted CCTV footage,” Cayetano added.

Susan Ople, a 2016 senatorial candidate and head of the Blas F. Ople Policy Center and Training Institute, said the government must apologize for what happened to Ortinez.

According to Ople, the 56-year-old OFW takes care of a 13-year-old boy in Hong Kong where she has been working for the past 26 years. “It is not the burden of Nanay Gloria to explain to her employer. She should be cleared of the wrong accusation.”

She assailed the Overseas Workers’ Welfare Administration (Owwa) for the agency’s “deafening silence” regarding Ortinez’s plight.

Owwa collects $25 from every OFW as membership obligation when they leave the country. Membership is renewed each time an OFW gets a new contract abroad or applies for an overseas employment certificate as proof one is an OFW.

“Owwa could have offered moral support and psychotherapy sessions given the trauma that Nanay Gloria experienced. Why the silence? The lack of support is inexcusable,” Ople said.

She urged Labor Secretary Rosalinda Baldoz to put Owwa Administrator Rebecca Calzado  to task for “failing to offer even a modicum of assistance to a beleaguered member.” With a report from Tonette Orejas, Inquirer Central Luzon