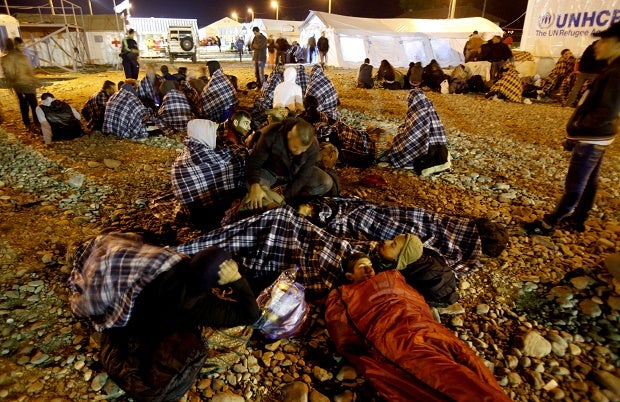 Migrants and refugees, wrapped in blankets, rest on the ground while awaiting a train that will take them towards Serbia, at the transit camp for refugees near the southern Macedonian town of Gevgelija, after crossing the border from Greece, early Friday, Oct. 16, 2015. Thousands of migrants arrive unprepared for cold weather and that affects women and children especially. International Organization for Migration said that more than 600,000 people had arrived by sea into Europe this year and more than 3,000 of them died trying to reach Europe to escape war or poverty. AP

UNITED NATIONS — The combined resources of UN agencies, the Red Cross and humanitarian organizations are no longer enough to protect the 60 million people displaced by war and persecution around the world, the UN refugee chief said Tuesday.

Governments, private citizens, corporations and foundations have provided the office of the UN High Commissioner for Refugees with a record $3.3 billion last year, Antonio Guterres told the General Assembly’s human rights committee. Yet humanitarian budgets aren’t enough “to cover even the bare minimum, and we are starting to see what happens as a result of that,” he said.

Guterres said “the trigger” for the mass arrival of Syrians, Iraqis, Afghans and Eritreans in the eastern Mediterranean this year “is the humanitarian funding shortfall.”

He also cited two longer-term trends: After years in exile most of the four million Syrian refugees in neighboring countries have depleted their savings and lost hope of a political solution to end the nearly five-year conflict.

Currently, Guterres said, 70 percent of Syrian refugees in Lebanon are living in “extreme poverty” and 86 percent in urban areas of Jordan are living below the country’s poverty line.

UNHCR has been struggling to provide cash and shelter materials to the growing number of extremely vulnerable families, he said. And earlier this year the UN World Food Program was forced to cut their assistance by 30 percent, “which made many refugees feel that the international community was starting to abandon them.”

As the refugee and migrant crisis in Europe has escalated, Guterres said, there have been new announcements of financial support to refugees in neighboring countries.

“But as welcome and timely as these additional funds are, they will not address the wide problem organizations like UNHCR are facing,” he said.

“There is an urgent imperative to review the way we finance humanitarian response today, because it is clear that humanitarian resources alone are vastly insufficient to respond to the enormous increase in needs which we have seen in recent years in Africa, the Middle East and elsewhere,” Guterres said.

He said the 34 UN appeals to provide humanitarian assistance to 82 million people around the world in desperate need are only 46 percent funded. And UNHCR expects to receive less than half the money it needs this year.

Guterres said 750,000 people have arrived on Europe’s shores since January, more than 3,400 have drowned and the death toll is rising quickly with the worsening weather. Just last week, he said, there were 13 shipwrecks off the coast of Greece and over 150 people died or are missing, including dozens of children.

Guterres said the European Union has the capacity to manage the crisis, but implementation of its decision to relocate 160,000 asylum-seekers “has been far too slow,” and reception centers, registration and screening for tens of thousands of people are urgently needed.