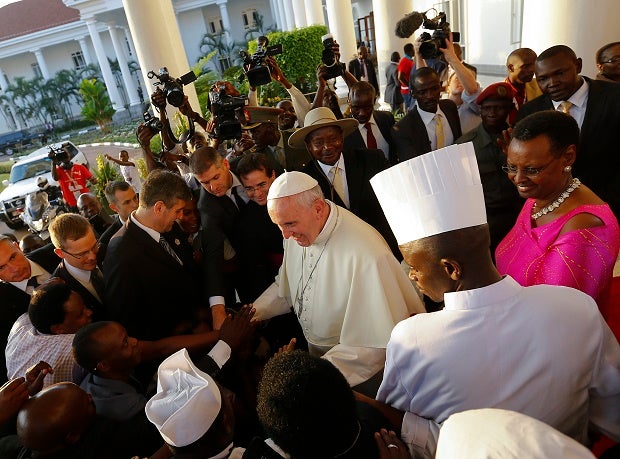 Pope Francis meets with Uganda’s President Yoweri Kaguta Museveni and his wife Janet at the State House, in Entebbe, Uganda, Friday, Nov. 27, 2015. Pope Francis is in Africa for a six-day visit that is taking him to Kenya, Uganda and the Central African Republic. AP

KAMPALA, Uganda — Pope Francis is paying his respects to 19th century Ugandan Christians who were burnt alive rather than renounce their faith, the latest group of martyrs from around the world honored by Francis in hopes of giving today’s faithful missionary role models.

Francis will pray Saturday at shrines dedicated to the 23 Anglican and 22 Catholic martyrs who were killed between 1885 and 1887 on the orders of a local king eager to thwart the influence of Christianity in his central Ugandan kingdom. At Namugongo, where most of the martyrs were burned alive, he will celebrate Mass in their honor to mark the 50th anniversary of the Catholics’ canonization.

As many as 2 million people are expected to attend, including the president of neighboring South Sudan, with whom Francis met in private after his official welcome ceremony Saturday with Ugandan President Yoweri Museveni.

“They remind us of the importance that faith, moral rectitude and commitment to the common good have played, and continue to play, in the cultural, economic and political life of this country,” Francis told Museveni and other Ugandan authorities and diplomats at a ceremony at the State House.

After the ceremony, Francis was welcomed at a secondary shrine to the martyrs by tens of thousands of shrieking faithful and a hip-gyrating traditional dancers, evidence of the enthusiasm that has greeted Francis on his first trip to Africa.

During his two days in Uganda, Francis is expected to touch on some of the same themes he emphasized during the first leg of his trip in Kenya: corruption, poverty and giving young Christians hope and encouragement. After the Mass on Saturday, Francis has a rally with young people, a visit to a charity and a meeting with local priests, seminarians and nuns.

In preparation for his visit, workers have been busy day and night fixing the narrow road leading to the shrine in Namugongo. The shrine itself underwent major repairs that were carried out like a military project: Ugandan troops from the engineering brigade joined the contractor to do everything from planting grass to laying pavers.

Francis has made a point on his foreign travels to honor local martyrs in hopes of inspiring a new generation of missionaries. When he was in South Korea, for example, he beatified 124 missionaries who helped bring the faith to the Korean Peninsula. He has also spoken out frequently about today’s martyrs, the Christians in the Middle East and Africa who have been slaughtered by Muslim militants.

The history of Uganda’s martyrs has helped shape the Catholic Church here, with huge numbers of pilgrims flocking to the Namugongo shrine, many of them Africans arriving from as far away as Congo and Tanzania. Most of the pilgrims walk long distances to the site to underscore their faith.

King Mwanga II of Buganda Kingdom ordered the martyrs killed during a period of political and religious turmoil as he tried to assert his authority amid the growing influence of missionaries from Europe.

But the history of the martyrs also shows a personal grudge Mwanga held against them: After the martyrs converted to Christianity, they began rebuffing his sexual advances since church teaching forbid homosexuality. That was part of the reason they were ordered killed, according to the history of the slaughter, “African Holocaust” by J.F. Faupel.

“It is absolutely true. It is a fact,” said Bishop Giuseppe Franzelli, a longtime Italian missionary in Uganda. “When they became Christians, they saw that this was not according to the Gospel, the teaching of Christ and they said no.”

The little-known history might help explain why homosexuality remains so taboo today in Uganda, which is 47 percent Catholic and has criminalized homosexuality.

The Vatican has refused to say whether Francis will discuss gay rights while here.

On Sunday, Francis heads to his final destination, the Central African Republic.