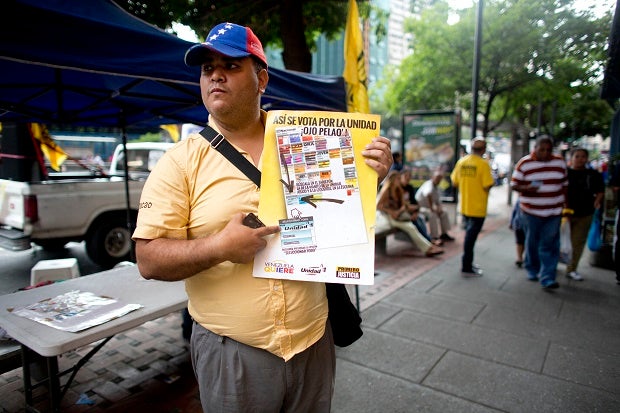 An activist of the opposition Primero Justicia or Justice First political party, holds a poster showing how to vote in the next congressional elections, in Caracas, Venezuela, Thursday, Nov. 26, 2015. An opposition leader was shot to death Wednesday while campaigning for next week’s congressional elections in Venezuela, members of his political party said. The shooting took place in the central town of Altagracia de Orituco, said the leader of the Democratic Action Party, Carolos Prosperi. He said he heard gunshots as the rally was breaking up and the town’s party leader Luis Manuel Diaz, was hit. AP

CARACAS, Venezuela — The slaying of a Venezuelan opposition leader at a campaign rally is becoming an international flashpoint a week before critical congressional elections.

The United Nations’ human rights office called on Venezuela’s government Friday to protect opposition leaders following the shooting death of a politician campaigning against the ruling socialist party ahead of the Dec. 6 elections.

Opposition leader Luis Diaz was shot Wednesday night at a rally in central Guarico state. His party, Democratic Action, is part of an opposition coalition that is mounting the strongest challenge in 16 years to the socialist government amid worsening economic problems in this oil-producing country.

UN Human Rights Commissioner Zeid Ra’ad Al Hussein said from Geneva that officials must ensure the safety of political opponents and others who question the state.

“Democracy suffers greatly when the pre-election environment is marred by violence, threats and intimidation,” he said.

On Thursday, human rights groups jointed with the US and the South American regional bloc UNASUR in expressing concern about political violence in Venezuela.

The opposition says the past week has seen at least seven attacks on its leaders, marring what has been a hotly contested but previously largely violence-free campaign for the National Assembly.

No arrests have been made in Diaz’s killing, which Venezuelan officials have blamed on a dispute between gangs.

President Nicolas Maduro promised a full investigation Thursday, and lashed out at the head of the Organization of American States, Luis Almagro, for calling the slaying an indication of grave problems with Venezuela’s democracy.

“Mr. Trash, I’m waiting for you to apologize for meddling in our affairs,” Maduro said, referring to Almagro as a piece of garbage several times.

Socialist party campaign chief Jorge Rodriguez said Diaz was a well-known member of a gang that steals cattle and carries out contract killings. He accused the opposition of cynically using his death to try to discredit the government.

Opposition leaders call Diaz’s killing a political assassination and say the government is directly responsible. They say the government’s slogan for the campaign, “Assembly or bust,” signals a willingness to resort to violence to manipulate a contest that polls indicate the socialist party is on track to lose badly.

Lilian Tintori, wife of jailed opposition leader Leopoldo Lopez, was the most recognizable figure on stage at the Wednesday event where Diaz was shot to death. She said Thursday that she has recently suffered other harassment, including a suspicious plane malfunction, and believes the bullets were meant for her.

“They wanted to kill me,” she said.