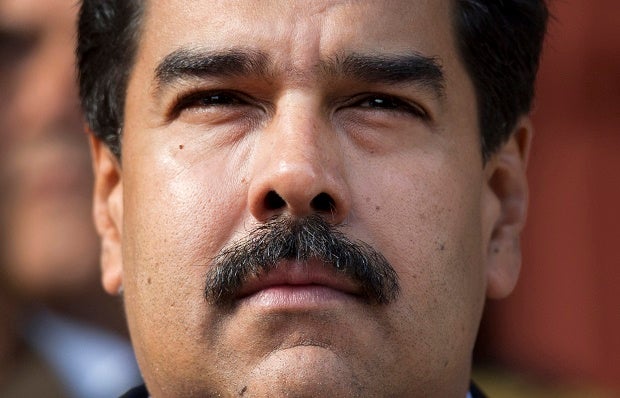 In this March 17, 2015, file photo, Venezuela’s President Nicolas Maduro listens to the playing of national hymns as he welcomes regional leaders to Miraflores presidential palace for an emergency ALBA meeting in Caracas, Venezuela. On Thursday, Oct. 5, 2015, Maduro repeated a promise to shave off his trademark moustache if his government doesn’t meet a year-end goal of handing over its 1 millionth public housing unit to a family. AP FILE PHOTO

CARACAS, Venezuela — Venezuelan President Nicolas Maduro is promising to shave off his trademark moustache if his socialist government doesn’t meet a year-end goal of handing over its 1 millionth public housing unit to a family.

Maduro earlier this week provoked laughter from friends and foes alike when he in jest pledged to cut his bushy facial hair if the goal wasn’t met. He repeated the pledge on Thursday, telling his Housing Minister that the future of the country’s most-watched moustache was in his hands.

“If by December 31 we have reached the 1 million mark, I’ll cut off my moustache as a form of self-punishment so everyone knows we didn’t meet the goal,” Maduro said at a ceremony to deliver 2,520 apartments in a housing project named for the late President Hugo Chavez.

“My moustache depends on you Minister, and more than my moustache, the housing projects depend on us. We can’t fail,” he said.

While Maduro lacks the charisma of his mentor Chavez, and is struggling ahead of legislative elections next month to straighten an economy wracked by widespread shortages and triple-digit inflation, such folksy, self-effacing humor plays well with many Venezuelans.

While opponents like to mock the president with graffiti stencils of his jet-black mustache, for many poor Venezuelans it’s a symbol of the former bus driver’s working class roots.