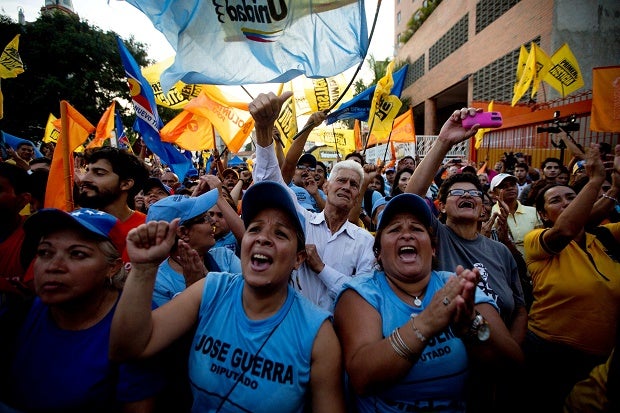 Opposition members cheer during a campaign rally for congressional candidates, in Caracas, Venezuela, Friday, Nov. 13, 2015. The process for the Dec. 6 legislative elections enters the final stretch with the formal start of the campaign in the midst of a complex economic crisis, and the recent scandal involving two nephews of first lady Cilia Flores on US drug trafficking charges. AP

CARACAS, Venezuela — It’s the story of the year or no story at all, depending on where one falls on Venezuela’s hyper-polarized political spectrum.

Venezuelan officials kept silent Friday on the arrest this week of two nephews of first lady Cilia Flores on US drug trafficking charges.

The South American country’s opposition leaders, meanwhile, made the news the focus of their rallies to mark the launch of the campaign season for crucial Dec. 6 congressional elections.

The two young men were arrested in Haiti on Tuesday on charges of conspiring to smuggle cocaine into the United States. They are being held in New York without bail.

The opposition hammered on the scandal on Friday during nationwide events celebrating the official start of the fight for control of congress — a battle that polls indicate the government may lose badly. Opposition leaders said the arrests had shocked the nation and showed the need for change after 16 years of socialist rule.

The most hard line party in the opposition coalition, Popular Will, referred to the arrests in its slogan for the campaign launch: “Today we start the shift from narco state to a better Venezuela.”

READ: US charges nephews of Venezuela first lady over drugs

US prosecutors have investigated several high-level Venezuelan officials for drug and corruption charges, but this week’s arrests marks the first time President Nicolas Maduro’s inner circle has been directly implicated. Even many government critics were surprised because they tend to see Maduro, the hand-picked successor to late President Hugo Chavez, as incompetent but not especially corrupt.

Neither Maduro nor any other governing official has commented on the arrests, although the president has claimed the US is targeting Venezuela.

Without mentioning the accusations against the first lady’s relatives, Maduro on Friday accused US President Barack Obama of disrupting relations, saying that “your agencies of the power establishment are breaking the basic rules of coexistence among nations.”

“Tie down your crazies, Obama,” Maduro said in a televised event from western Venezuela.

National media have largely blacked out the news of the drug charges. One of the country’s largest daily newspapers reported on the drug bust, but left out any connection to the first family.

State television has been broadcasting footage of government giveaways, with poor residents lining up to receive laptops, appliances, and keys to newly built apartments. On Friday, Maduro filled his Twitter feed with images of Chavez as well as warnings to his followers not to trust biased media.

On Twitter, Venezuelans posted memes and jokes poking fun at a weekly television show Flores hosts titled “Cilia with her family,” and mocking the administration for banning a Telemundo soap opera the week of the arrests on the grounds that it glorified the lifestyle of drug traffickers.

The opposition coalition held a news conference to denounce the “monstrous censorship” the case revealed, and promised to launch an official investigation once it wins control of congress.

Opposition governor and former presidential candidate Henrique Capriles demanded an official response, though he did not really seem to expect one.

“The case shows how rotten this government is,” he said.