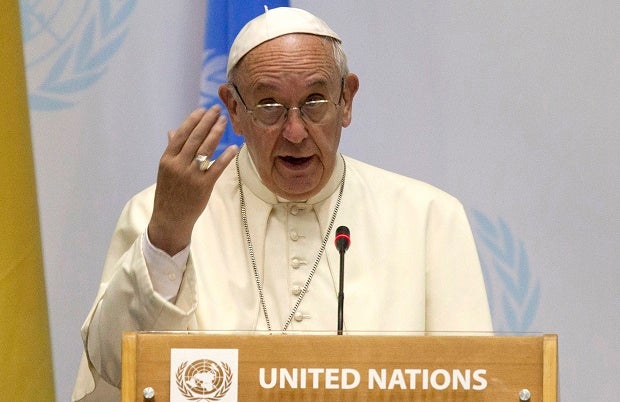 NAIROBI, Kenya—Pope Francis won a rapturous welcome Friday as he visited a congested Kenyan slum to convey a message of solidarity with the poor and underprivileged, a highlight of his three-nation Africa tour.

READ: Pope arrives in Kenya in pilgrimage to 3 African countries

The 78-year-old pontiff was given a rapturous welcome as he arrived in Kangemi, home to more than 100,000 people who live in shacks without sewerage, including 20,000 who belong to the local Catholic parish.

People arrived long hours before dawn in the hope of catching a glimpse of the pope, who has made humility and help for the impoverished a hallmark of his tenure.

Wild singing and ululating broke out as Francis arrived in the Popemobile down the streets, weaving through the sea of tin-roofed homes.

“It is once in a lifetime,” said Edward Mwaniki, who comes from Kangemi, who waited for hour with his wife and three sons. “It is an honour to be here being a Catholic.”

After visiting Kangemi’s Catholic church, the pope will meet young people at Kasarani national stadium, where US President Barack Obama gave a keynote speech when he visited Kenya in July.

After arriving in the capital Nairobi on Wednesday at the start of his first visit to Africa, the pope celebrated a giant open air public mass and spoke forcefully about the dangers of radicalisation and climate change.

On Thursday, the pope made a special appeal to young people to work “to shape a society which is ever more just, inclusive and respectful” of human dignity.

The fight against poverty has been a key element of his visit.

“Experience shows that violence, conflict and terrorism feed on fear, mistrust, and the despair born of poverty and frustration,” he said after arriving on Wednesday.

It was a theme he picked up again before Thursday’s mass on meeting leaders from different faiths. “All too often, young people are being radicalised in the name of religion to sow discord and fear, and to tear at the very fabric of our societies,” the pope said.

Later he visited the United Nations headquarters in Nairobi, issuing a stark environmental message in which he warned it would be “catastrophic” if agreement is not reached at a key UN climate change summit which begins in Paris on Monday.

“We are confronted with a choice which cannot be ignored: either to improve or to destroy the environment,” he said.

Thousands of people queued through the night braving torrential downpours to take part in Thursday’s mass.

But the numbers fell far short of the million people Catholic officials had expected to attend the service, with the weather likely keeping many away.

Pope Francis leaves Kenya mid-afternoon Friday for Uganda where he will spend two days before continuing on to Central African Republic, a country wracked by sectarian conflict.

The visit has taken in tight security over fears for his safety.

Islamist rebels have staged a string of attacks in Kenya, including the April massacre at Garissa university in which 148 people  died, and the 2013 assault on the Westgate shopping mall that killed 67.