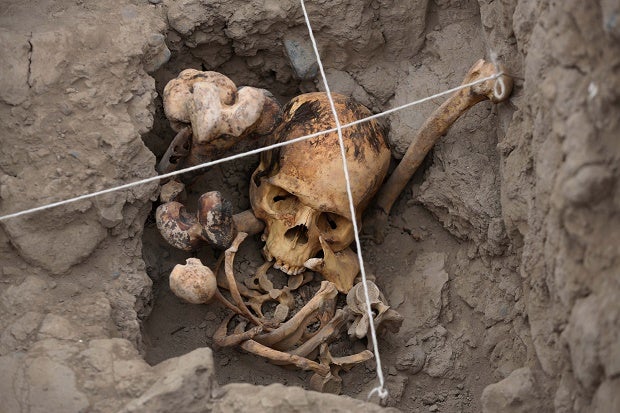 Pieces of string mark a hole with unearthed skeletal remains of members of the Ichma culture at the Huaca Pucllana archaeological complex, in Lima, Peru, Thursday, Nov. 26, 2015. Remains of three women and a man, all thought to have lived sometime between A.D. 1000 and 1450, were found at the top of the Great Pyramid in the Huaca Pucllana archaeological site in Peru’s capital. AP Photo

LIMA, Peru—Archaeologists in Peru have found four tombs that are more than 1,000 years old in a pyramid-shaped cemetery that now sits in the middle of a residential neighborhood in Lima, experts said Thursday.

“There are four human burial sites, for adult individuals, three women and one man, who lived between the years 1000 to 1450,” said archaeologist Isabel Flores, director of the program in Huaca Pucllana, a ceremonial complex in Miraflores district.

The find confirms the historical presence in Lima of the Ichma culture. It took hold on the central coast around 1000 and disappeared around 1450 as Inca civilization began to spread.

“These are the first four tombs of the Ichma culture. We think that we may still find more” despite long-term looting, said Flores, who has been researching the site for more than three decades.

The tombs featured seated remains, looking toward the sea, wrapped up in textile and hand-woven natural materials alongside offerings such as ceramics and weaving tools.

“So this is the first district in the country that has more than 1,500 years of known history to date,” added Flores, who also runs the Huaca Pucllana Museum.

In Lima alone, there are some 350 “huacas,” the indigenous Quechua-language word for these ceremonial complexes, most of which predate Spanish colonization.