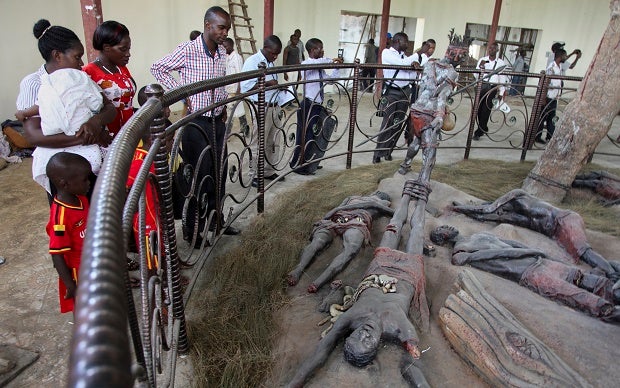 Ugandan visitors look at moulded impressions of the Uganda Martyrs, who were murdered between 1885 and 1887 on the orders of a local king eager to thwart the influence of Christianity, at a shrine for them that Pope Francis is expected to visit later in the week, at Namugongo, a suburb in the east of Kampala, in Uganda Monday, Nov. 23, 2015. More than 2 million people are expected to converge near a minor basilica in the Ugandan capital where Pope Francis will celebrate Mass on Saturday, an official with the Roman Catholic Church said Monday, even as workers put in extra hours to spruce up the shrine. AP Photo

NAMUGONGO, Uganda—More than 2 million people are expected to converge near a minor basilica in the Ugandan capital where Pope Francis will celebrate Mass on Saturday, an official with the Roman Catholic Church here said Monday even as workers put in extra hours to spruce up the shrine.

The shrine is undergoing major renovations, including replacing aluminum with glass on its dome, and repairing the narrow road leading to it in the Kampala suburb of Namugongo.

“To receive all these people is not easy. You have got to provide facilities for all of them, for all the pilgrims coming from everywhere,” said Vincent Lubega, the rector of the Uganda Martyrs Shrine.

Although work inside the shrine is complete, workers are planting grass at the entrance and the terraced pavilion where pilgrims will sit is under construction. Many Ugandans, meanwhile, have donated cash toward improving the shrine.

The shrine holds a special place in local Catholicism as it is dedicated to a group of Christians—referred to as the Uganda Martyrs—who were murdered on the orders of a local king eager to thwart the influence of Christianity.

Francis is expected to refer to the example of those martyrs—45 Anglicans and Catholics killed during the persecution of Christians between 1885 and 1887. Pope Paul VI canonized the 22 African Catholics in 1964.

“We invited the pope to celebrate with us the 50 years since the canonization of the Uganda Martyrs. This is a top priority for which he accepted our invitation,” said Archbishop John Baptist Odama, the head of the conference of local bishops.

The pope’s “compassion for the poor and his frankness of spirit is an encouragement to all of us who live in the light and stand for the causes that matter to humanity,” Ugandan President Yoweri Museveni said in a statement Monday.