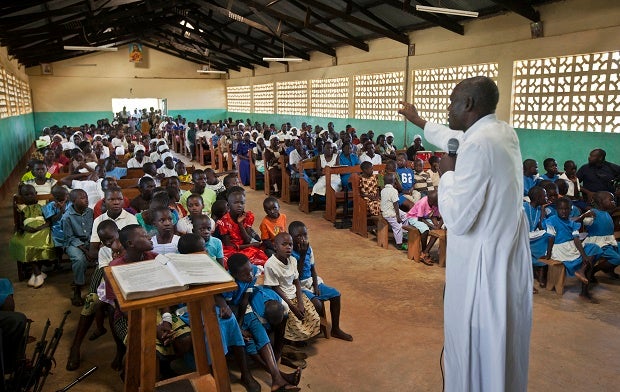 In this Nov. 4, 2012 file photo, members of the congregation listen as catechist Joseph Okuku, right, during a service at the St. Richard Catholic Church in Kogelo, western Kenya. Pope Francis follows his predecessors next week Nov. 25-30, 2015 to visit Africa whose growing numbers of Catholics are seen as a bulwark for a church seeking to broaden its appeal amid secularism, competing Christian faiths and violent extremism, in a trip that will take him to Kenya, Uganda and the Central African Republic. AP

During the quarter century of his papacy, St. John Paul II traveled to 42 African countries and earned the nickname “the African.”

Pope Benedict XVI said Africa was a continent of hope.

Next week, Pope Francis joins his predecessors and visits a region whose growing numbers of Catholics are seen as a bulwark for a church seeking to broaden its appeal in the face of challenges from secularism, competing Christian faiths and violent extremism.

The latter threat, which struck Paris on Nov. 13 with attacks claimed by the Islamic State of Iraq and Syria group and then Mali on Friday, will be a key theme of the pope’s Nov. 25-30 trip to Kenya, Uganda and the Central African Republic — and a potential security risk for the pope himself.

Each of the three countries have their own narratives of ethnic and sectarian division. In Kenya, the first stop on his tour, Francis is expected to offer a word of encouragement to Christians still reeling from an April attack by the Islamic militant group al-Shabab that killed nearly 150 people at a Kenyan college of mostly Christian students.

He will reach out to “people who are afraid, who have been terrorized, who have been subjected to a lot of security checkpoints and all that,” said Rev. Stephen Okello, a Kenyan Catholic priest who also recalled unrelated ethnic violence following elections in 2007 that killed more than 1,000 people in Kenya.

“Kenyans really need that reconciliation,” said Okello, an organizer of the papal visit. Given other regional violence, “this might be a message that is good for the whole of Africa,” he said.

Indeed, Islamic extremists stormed the Radisson Blu hotel in Mali on Friday and killed at least 20 people. Boko Haram, an Islamic extremist group, has waged an insurgency in Nigeria for years. And of more immediate concern to the Vatican, violence between Muslims and Christians in the Central African Republic has raised concerns about security on Francis’ trip itself.

Challenge to the Pope

The challenge for the pope, who has described the violence flaring in Paris and elsewhere as part of a piecemeal “third world war,” will be to appeal for people to “rise above their humanity” by resisting the temptation to harden their attitudes, said Jo-Renee Formicola, a papal expert and political science professor at Seton Hall University in the United States.

“How do you reconcile mercy and war?” Formicola said.

Aside from the conflicts plaguing the continent, Francis is also expected to touch on themes close to his heart that are also of enormous concern to Africa: poverty and the environment, as well as the need for dialogue between Christians and Muslims.

Despite the challenges, Africa is a place of promise for the Catholic Church, which has withered in Europe and the Americas because of increasing secularism and competing evangelical and Protestant churches.

The proportion of African Catholics in the world population of Catholics increased from 7 percent to 16 percent between 1980 and 2012, according to a report this year by the Center for Applied Research in the Apostolate, a research center affiliated with Georgetown University in the United States. Population growth and growing life expectancy will more than double the number of Catholics to 460.4 million in 2040, it said.

The Catholic Church in Africa faces particular challenges, including traditional customs of ancestor veneration that clash with church doctrine and other Christian denominations that offer the power to heal to congregations. Some Catholic priests have left the church rather than follow a vow of celibacy, and polygamy is practiced in some parts of Africa.

“The church has the task of reinforcing the conviction that monogamy is the way forward,” Nigerian Cardinal Francis Arinze wrote in the preface to “Christ’s New Homeland – Africa,” a book published this year.

Bishop Barthelemy Adoukonou wrote a chapter for that book in which he said Christianity was being challenged “not only by a radical, militant Islamism, but also by a certain Western civilization that is secularist, hedonist, sensualist, and consumerist.”

Rooted in traditional cultures, many African Catholics have conservative values that might not align with Francis’ measured gestures of tolerance toward, for example, homosexuals. Gay sex is illegal in a number of African countries and discrimination against homosexuals is widespread through the continent.

Monsignor Abel Gabuza, a South African bishop, hopes Francis will energize African Catholics with his message of inclusiveness and concern for the less fortunate. The pope is likely to echo his bishops in speaking out against “ideological colonization,” a term for efforts by the West to promote policies including contraception in developing countries, often as a condition for development aid.

“You look at how Africa has been looked down upon and how, even today, we still suffer the consequences of colonialism, racism and so many other things,” Gabuza said. “The pope, the message that he brings across is to say, ‘You Africans are also equally important.'”

Okello, an organizer of the pope’s visit to Kenya who also did groundwork for John Paul’s trip there in 1995, said he expects Francis will promote harmony despite Africa’s often contentious issues.

“We know his style is not one of condemning and he’s somebody who is very compassionate,” Okello said. “He wants you to understand how not to do things by not doing things himself.”