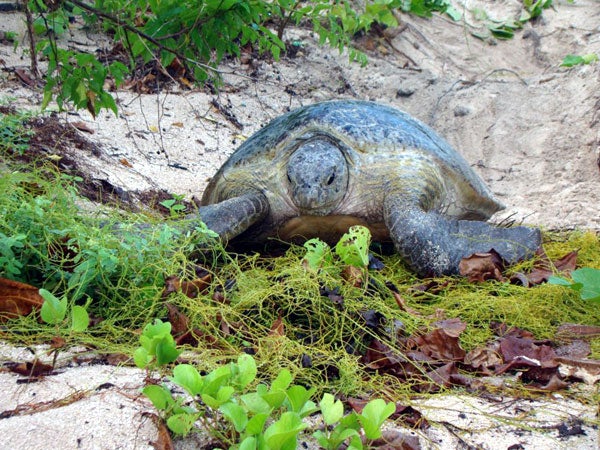 PUNTA CHAME, Panama—Sea turtle eggs laid in the sand of beaches in Panama risk getting fried before hatching because of rising temperatures, an environmental protection group in the Central American country is warning.

“Global warming sounds a bit apocalyptic, but we’re already seeing the effects on turtle populations,” Gerardo Alvarez, a member of the Tortuguias group, told AFP on the weekend.

“With the rise of a couple of degrees in the overall average temperature, many species of turtle will disappear because the nests will fry,” he said.

His group has found that temperature spikes are risking the viability of eggs laid by thousands of sea turtles on two Pacific coast beaches it monitors.

The fact that the sand is warmer, too, increases the chances of female turtles hatching, throwing gender ratios out of balance.

The eggs need a sand temperature range of 26 to 35 degrees Celsius (79 to 95 Fahreinheit) to be viable. Higher than that and incubation is halted, with the proteins inside becoming cooked.

Alvaro said that at the lower end of that range, males were more likely to hatch, while above 32 degrees, there were more females.

“In these circumstances, the turtle population is becoming more and more feminized and there aren’t enough males to mate with them to have young,” the expert said.

He spoke AFP on Saturday, as 300 people released newly hatched sea turtles on the beach of Punta Chame, near the city of Panama, brought in from an incubation unit.

The warning came ahead of a UN summit on climate change that is to be held in Paris next week. The talks aim to curb greenhouse gases blamed for global warming.