TACLOBAN CITY—The photo of a former village official sitting on a leatherback sea turtle, an endangered species, might have gone viral on the social networking site Facebook, in Marabut town, Samar province, but still the Department of Environment and Natural Resources (DENR) does not hold him liable for his act.

“He was happy to see a giant turtle, which was why he had his picture taken with the turtle. It’s the intent. He did not harm or hurt the turtle,” said Carlo Tuballa, DENR assistant regional director for technical services.

The official, Jose Lastimado, did not mean to harm the sea creature, Tuballa said. Without this intent, he pointed out, Lastimado would have been charged with violating Republic Act No. 9147, or the Wildlife Resources Conservation and Protection Act, which carries a penalty of six months’ imprisonment and a fine of P20,000.

The leatherback, the largest among turtles in the world, was caught in a net owned by fisherman Jessy Amora around 1:30 a.m. on Aug. 5, 1 kilometer from the shore of Pinamitinan.

Lastimado, a former chair of Barangay Pinamitinan, more than 5 km from the town center and president of the Association of Barangay Captains of Marabut, was investigated by the DENR after a photo of him sitting on the leatherback (Dermochelys coriacea) became viral on Facebook and drew criticisms from netizens. 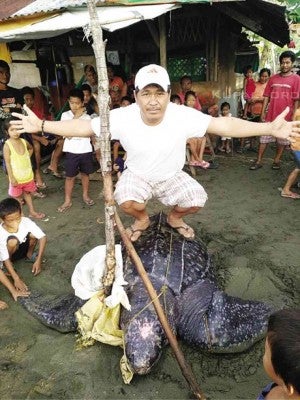 A PHOTO of Jose Lastimado squatting on top of a leatherback sea turtle has gone viral in Facebook.

“Who would not be happy when you see a giant turtle?” Tuballa said, referring to the community mood.

He said the villagers returned the turtle to the sea in a healthy condition about 11 a.m. on the same day, or 10 hours after it was caught. The scratches on its carapace came about as the turtle struggled to free itself from entanglement and were not inflicted by the residents, he added.

The creature, however, was not tagged by DENR personnel who went to Pinamitinan as their office had run short of the items’ supply, Tuballa said.

The official asked the public, especially those living in the coastline, not to harm turtles or any sea creature and instead return them to the sea.