BAGUIO CITY—Banaue in Ifugao province is known for its poster-perfect rice terraces, so why is a six-story car park building being planned in the heart of the mountain town?

Municipal officials are pushing through with a P55-million car park project in Barangay Poblacion, Banaue. A group, however, has asked the Ifugao Regional Trial Court (RTC) to stop the project, saying residents had not been consulted about it and that its environmental impact had not been assessed.

The group also claimed irregularities in the granting of the government loan for the project.

Flor took a leave of absence on July 21 and had not acted on the petitioners’ motion for reconsideration. The case has been transferred to RTC Branch 14 in Lagawe, the capital town of Ifugao.

Banaue Mayor Jerry Dalipog said the construction of the building could encourage tourists to stay longer in his town.

“We estimate that about 25 percent of tourists who visit Banaue bring their own cars, but drive away immediately because they have no secure place to park when they hike to the terraces,” he said. 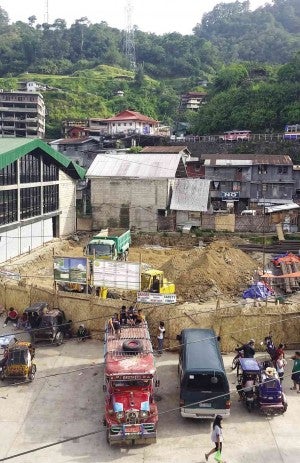 CENTER OF CONTROVERSY Households put up signs saying “No,” referring to this construction site where a government parking building would rise in Banaue, Ifugao province. The municipal government took out a loan to build the facility to address traffic problems created by the influx of tourists who come to see the town’s famous rice terraces. Residents opposing the project say it should be built outside the town. KAYZEE BAYER LUGLUG/CONTRIBUTOR

Since 2013, about 70,000 tourists have visited Banaue, but many motorists park along the town’s narrow two-lane roads, Dalipog said. Only Banaue Hotel and Halfway Lodge have parking spaces, he said.

The mayor said the construction of the parking building had proceeded after the first TRO lapsed on July 19.

In their complaint against Dalipog and the municipal council led by Vice Mayor Joel Bungallon, Bahatan and his group cited alleged irregularities in the grant of the loan from Development Bank of the Philippines (DBP).

They claimed that Dalipog executed the loan on Dec. 10, 2014, while Ordinance No. 16, which authorizes the mayor to borrow money from DBP, was still being reviewed by the provincial board.

The Banaue council approved the ordinance on Sept. 11, 2014. The provincial board endorsed the law on Jan. 27, or more than a month after the loan was made.

“I do not know what irregularities the protesters are talking about. We have strictly followed the process required by law,” Dalipog said in a telephone interview. He said he took out the loan to supplement government allocations because Banaue’s internal revenue allotment was insufficient.

On May 15, in an attempt to stop the project, Bahatan asked the DBP branch in Solano, Nueva Vizcaya province, to withhold the release of the loan. But the bank manager, Loreto Marites Ilagan, assured him that the municipal government had complied with all requirements.

Read Next
DENR clears man who sat on endangered turtle
EDITORS' PICK
Geek out at TOYCON 2022 powered by Smart Signature
UK’s Boris Johnson will resign, BBC reports
High inflation: Your P1 is now worth only 87 centavos
High-risk pregnancy: Reducing your risk is in your hands
Unemployment rate up to 6% in May
House energy committee chair Arroyo bats for cheap electricity
MOST READ
Suspect in grisly killing of missing woman in Bulacan arrested
Kim Atienza’s daughter flaunts bikini body in response to critics of her ‘revealing photos’
Cop slain in Isabela ambush
FDA probes popular Filipino noodle brand for ‘high level of ethylene oxide’
Don't miss out on the latest news and information.