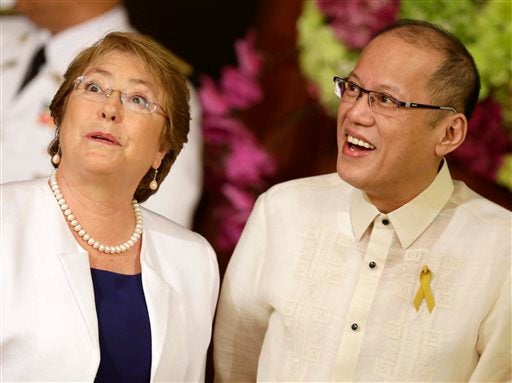 Consider it a State of the Nation Address (Sona) for the international business community.

President Benigno Aquino III on Monday showcased his administration’s achievements and flagship programs before thousands of business leaders at the CEO Summit held in Makati Shangri-La.

Saying the topic is “deeply personal” to him, Aquino went on to discuss the importance of freedom and democracy.

“We will have important conversations about how we can free our people from the oppression of poverty, and how to empower them to take part in sustainable economic growth,” he said. “Today, perhaps I can tell you about the Philippine story: what we have done to achieve large-scale transformation.”

Without naming his predecessor, former president and now Pampanga Representative Gloria Macapagal-Arroyo, Aquino talked about the “lost decade” or the time when the Philippines experienced low income growth and high inequality.

“If ten years ago, if my predecessor had done what we’re doing now, I can only imagine where the Philippines would be,” he said. “Of course, I am also aware that past is past, and nothing you can do in the present or the future will change it. Nevertheless, remembering the past revitalizes us—and energizes us to make up for lost time.”

Aquino said the past administration’s “trickle down economics” was deemed ineffective. “Thus, inclusive growth became the north star of our national policy—growth that truly helps each and every Filipino lift themselves up from poverty, and play a meaningful role in continuing our country’s growth story.”

He said the administration’s bottom-up budgeting was crucial in making the most out of the country’s scarce resources.

“We plugged leaks throughout the bureaucracy, and we did not shy away from confronting the most complex and crippling problem of our nation–namely, corruption,” he said.

Aquino, who is known for his good governance campaign, cited the cases filed against officials accused of corruption. Arroyo, who is now under hospital arrest, has been charged with plunder while former Chief Justice Renato Corona was impeached. Legislators also linked to the infamous pork barrel scam have been arrested.

“We have likewise filed 581 cases against tax evaders and smugglers, who owe the Filipino people billions of pesos in taxes,” he said.

The President said going after corruption “naturally freed up or helped increase the resources we had at our disposal.”

Near the end of his speech, he focused on the conditional cash transfer program.

“It gives cash grants to poor households, as long as their children go to school, are vaccinated, amongst other conditions. This responds to the twin problems of families not being able to get by, and children not being able to attend school,” he said.

“Now, the situation is extremely different. From 1.83 percent of GDP in 2010, we have increased our infrastructure budget to 4.10 percent of a GDP that, might I emphasize, has exhibited fast-paced growth,” Aquino said.

He said the problem now is absorptive capacity or having not enough engineers, contractors and building materials to construct infrastructure.

“You have seen the transformation of our country—from being known as the Sick Man of Asia to becoming Asia’s New Darling. You have seen how our economy has become one of the fastest growing in the world, and how we have quickly risen in global measures of competitiveness,” he said.

Aquino said what has happened with the Philippines can be implemented on the regional scale.

“I am confident we can author the next great chapter in the history of human civilization; as a connected, synergized Asia-Pacific, we can bring about the advent of a region—and a world—where no one is left behind,” he said.