Roxas Boulevard shut down due to Paris attacks – Manila official 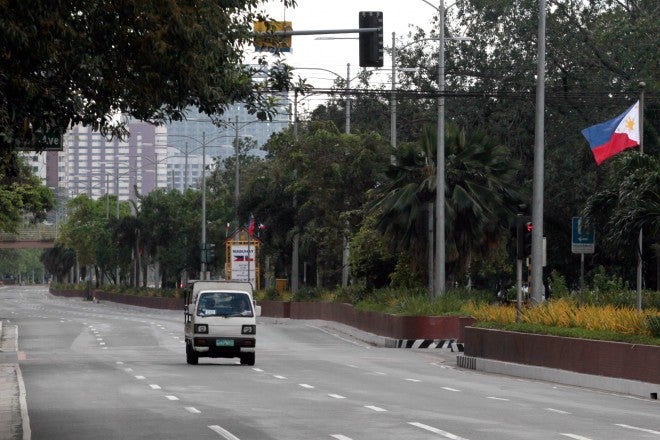 In preparation for the Asia-Pacific Economic Cooperation (APEC) summit in Manila, Roxas Boulevard has been closed to traffic.  LEO M. SABANGAN II.

MANILA, Philippines — The decision to also ban pedestrians aside from motorists from Roxas Boulevard starting Monday (Nov. 16) until Friday (Nov. 20) for the Asia-Pacific Economic Cooperation (APEC) meet was a result of the Paris attacks that claimed more than 100 lives last week.

Johnny Yu, chief of Manila’s anti-disaster unit, said the joint task force overseeing the security preparations for the leaders summit made the recommendations on Sunday.

“Twenty-one world leaders are arriving in the country. We have to protect them. It would be a national embarrassment if something bad happens to them,” he said.

Eight lanes of the major thoroughfare, from Kalaw to P. Ocampo, were heavily guarded. Yu said pedestrians could only pass through the service roads.

Yu said it was the “first time” that the city government closed the bay area to pedestrians for a special occasion. The no-walk zone on Manila Bay’s boardwalk was usually implemented only during calamities.

Even joggers have been banned from the area while only accredited APEC personnel in charge of security and with proper identification cards are allowed there for the duration of the international meet.

Roxas Boulevard in Manila is home to key establishments and facilities. The US Embassy is located in the area as well as a number of hotels where some Apec delegates will be staying. SFM

Read Next
Aquino showcases PH achievements at CEO Summit
EDITORS' PICK
Manila is 78th most expensive city in the world for foreign workers
TeaM Energy pushes development programs to help in pandemic rebound
Want to help local farmers? Shop small and eat Real Food
Piolo Pascual: The Ultimate Heartthrob continues to level up
ICC is everything but a court of ‘white people’
Garcia softens stance, meets IATF halfway on swab-upon-arrival policy
MOST READ
Sharon Cuneta on living in the US: ‘Nagagawa ko lahat ng normal na bagay’
ICC is everything but a court of ‘white people’
Duterte-Duterte tandem possible but ‘winnability is another question’ — Binay
More than 150,000 voters wiped off the registration list – Comelec
Don't miss out on the latest news and information.