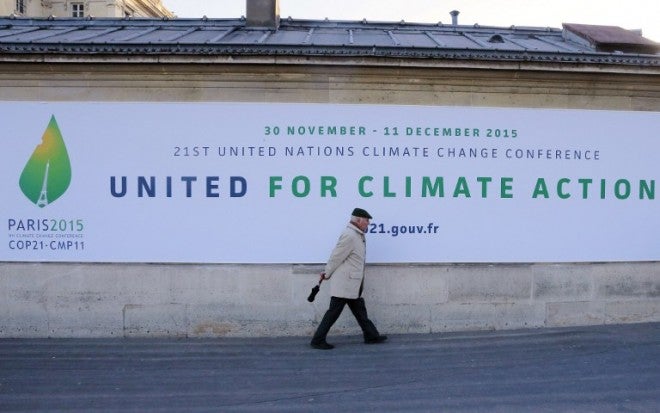 Large swathes of New York and Shanghai could disappear under the waves and millions driven into poverty, fresh climate reports warned as ministers scrambled Monday for common ground weeks ahead of a crunch environmental summit.

If global warming continues on its present trajectory of 4 C (7.2 F), rising sea levels will claim land inhabited by more than 600 million people, according to a survey by Climate Central, a US-based research group.

Such a rise would hit China the hardest, with around 145 million people living in coastal areas that would be submerged, the report warned.

Even if the Paris summit, which starts on November 30, succeeds in its goal of limiting temperature rises to 2 C, around 280 million people would find their homes underwater, forecast Climate Central.

A separate World Bank study released late Sunday said there could be “more than 100 million additional people in poverty by 2030” if action was not taken to stem climate change.

“The poor are more vulnerable to climate-related shocks than wealthier people,” said the report, urging “strong action” from leaders and diplomats at the Paris summit.

French Foreign Minister Laurent Fabius, who is hosting the meeting, issued his own dire warnings as ministers gathered in the French capital for eleventh-hour negotiations.

“It is life on our planet itself which is at stake,” Fabius told journalists as ministers and climate envoys from 70 countries met for pre-summit talks to iron out tough political questions.

Russia, a major oil producer, is seen as a deal-maker or -breaker in the years-long attempt to negotiate the world’s first truly universal pact to curb climate-altering greenhouse gas emissions.

The UN’s climate science panel has warned of an average temperature rise of “four, five, six degrees, if we do not act extremely quickly,” he said.

“This would have catastrophic consequences because there would be drought… and colossal migration problems, including problems of war and peace.”

Ministers are aiming to ink a global deal to prevent worst-case-scenario warming at the end of the November 30-December 11 Conference of Parties (COP21) in Paris.

It will be opened by UN chief Ban Ki-moon and some 100 heads of state and government including US President Barack Obama, China’s Xi Jinping, Narendra Modi of India — and now also Putin.

The three-day ministerial “pre-COP” from Sunday to Tuesday must seek political convergence on key issues still dividing nations, to avoid a repeat of the 2009 Copenhagen summit which ended without a binding global pact.

The Paris agreement will be underpinned by national pledges to curb greenhouse gas emissions from burning coal, oil and gas — the best way to slow climate change.

But the UN this week issued a fresh warning that pledges submitted to date set the stage for warming of closer to 3 C, or more.

Last month, scientists said the first nine months of 2015 had been the hottest on record worldwide.

Climate negotiators were bracing for another report later Monday, this time from the United Nations weather agency, which will release its annual report on the concentration of greenhouse gases in the atmosphere.

Ministers will base their discussions in the coming days on a rough draft of a deal compiled by rank-and-file diplomats over years of tough negotiations in the UN climate forum.

They cannot alter the text — merely identify areas for potential political compromise to be fed back into it.

For now, the blueprint remains little more than a laundry list of often directly opposing national options for dealing with the challenge at hand.

Developing countries insist rich ones should lead the way in slashing emissions as they have polluted for longer.

They also want assurances of finance to make the shift from cheap and abundant fossil fuel to greener energy sources, and to shore up defenses against climate change-induced superstorms, drought, flood and sea-level rise.

But industrialized countries point the finger at emerging giants such as China and India spewing carbon dioxide as they burn coal to power expanding populations and economies.