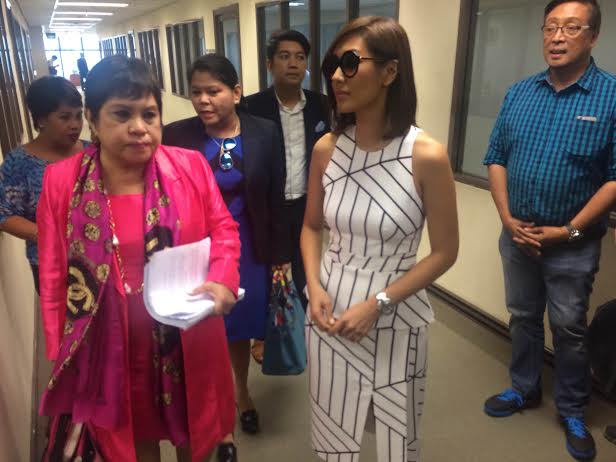 The 24-page complaint highlighted Lim’s Twitter posts and blog entries at the Fashion Pulis website, which criticized Uy for making Mendoza wear “a recycled gown” during Eat Bulaga’s “Tamang Panahon” event at the Philippine Arena last Oct. 24 and a “hand-me-down jacket” for a magazine photoshoot.

Uy’s legal counsel, lawyer and senatorial aspirant Lorna Kapunan, said the posts were “meant to destroy the reputation of the celebrity stylist and cause fans to hate her.”

“I have been receiving hate mails because of the allegations,” Uy told members of the media after she filed the complaint at the prosecutor’s office.

When asked why it took her about two weeks to file the case, Uy said she spent the two weeks preparing her case even as Lim constantly named her in social media posts and even in events.

“I hope he checks his information first before writing about it,” Uy added.

According to Lim, Uy made Mendoza wore a “recycled” pink gown during the Philippine Arena event, a dress which was already worn by Kim Chiu during a 2013 fashion show at the Edsa Shangri-la.

Gown designer Francis Libiran earlier explained that Eat Bulaga bought and paid for the gown, which was launched during the “Francis Libiran Metrowear Icon” fashion show in 2013 with Chiu as the model.

“This gown has not been worn at any other event by any other celebrity,” the designer added.

As for the slander charge, Kapunan explained that Lim also made “false and verbal tirades” against Uy during an event at the Manila Peninsula last Oct. 28.

Actress Isabelle Daza, who heard and witnessed Lim’s accusations, said that the gossip and fashion blogger accused Uy of making Mendoza wear during a magazine photoshoot a jacket which Uy allegedly wore during an earlier event.

“The posts and accusations of Lim were untrue, malicious, irresponsible and made in bad faith. They were meant to cast aspersion upon Ms Uy, erode her credibility as a fashion stylist and paint her as an incompetent fashion stylist for Maine,” added Kapunan.

The lawyer added that Uy worked hard to establish her name in the fashion industry and that Lim “must be held accountable for causing Uy humiliation and extreme distress.”

“For all these, Ms. Uy cannot let him get away with his actions especially in light of the fact that many people in the fashion industry and show business were apparently bullied by Mr. Lim. It is imperative to stand up and fight against irresponsible and unfair cyberbullying,” Kapunan added.

She noted that if found guilty, Lim could be jailed for 6 to 12 years.  SFM