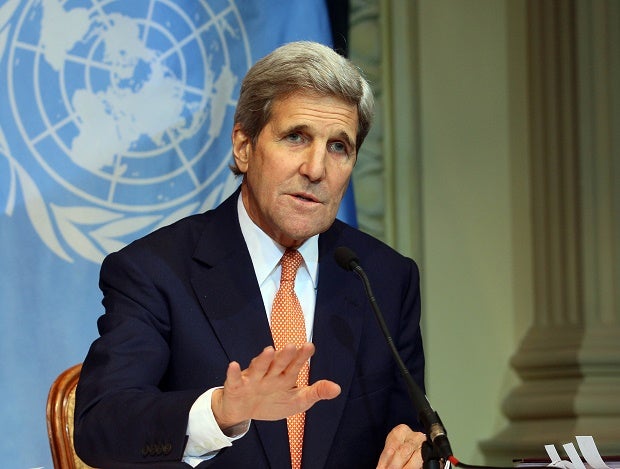 VIENNA, Austria—US Secretary of State John Kerry jets into Central Asia on Saturday for a five-day, five-nation tour of the “Stans”—to reassure them they will not be forgotten.

Concern is mounting in the region that, as the US operation in Afghanistan finally draws towards a close, Washington will lose interest in its landlocked northern neighbors.

The Central Asian economy has already taken a hit from falling oil prices and the knock-on effect of international sanctions against their former Soviet master Russia.

READ: Kerry to play lead US role at Asia summits

And now the Islamic State jihadist group is recruiting fighters from the region—including a US-trained special police chief—raising the spectre of extremist violence.

Senior US officials see Kerry’s visit to Kyrgyzstan, Uzbekistan, Kazakhstan, Tajikistan and Turkmenistan as “very timely” as the region seeks outside reassurance.

But Washington also has concerns that the young republics, never paragons of freedom, may overreact to the crisis and crack down further on their own populations.

This in turn could provoke religious violence in the mainly Muslim region of the kind that has dragged nearby Pakistan and Afghanistan into violent conflict.

In Tajikistan, for example, President Emomali Rahmon’s regime banned the main opposition party and jailed many of its leaders, accusing them of fomenting Islamist extremism.

“I don’t know how much that was because of fear and a threat and how much it was a consolidation of power,” a senior US official told reporters just ahead of the visit.

“Certainly I think there’s probably some playing up of those anxieties by some quarters.”

“There’s this kind of Soviet system of close regulation of religious practices and that’s more likely to cause people to turn to resort to violence and rebel against the state.”

Certainly, the Islamic State group recruits Central Asians—US officials estimate 500 to 600 Tajiks have joined and Kazakh officials say 200 of their citizens are in Syria.

But both the US official and the British expert said that most of these were radicalised and recruited while working in Russia and that there is little danger so far at home.

“We’ve not seen any real indication of ISIL (another name for ISIS) activity in Central Asia but the recruitment is worrisome and that is what we watch,” the US diplomat said.

But the Islamic State group’s most high-profile defection showed the weakness of these monitoring and anti-radicalisation efforts—he was one of their own.

Gulmurod Khalimov was not only the commander of an elite Tajik police unit, he had received US-funded counter-terrorism training in the United States.

Earlier this year he disappeared then resurfaced apparently in Syria starring in an IS recruitment video, issuing dark threats and urging more Central Asians to follow him.

“That has really shaken not just the Tajiks but all the region,” the US official admitted.

“He had undergone some of our training. I think it was a shock to everyone that he had been radicalised and recruited by ISIL.”

Several governments in Central Asia have responded to the threat, real or imagined, of radicalism with even tougher measures to control Muslim religious expression.

In Tajikistan, children and youths under 18 are banned from mosques and Islamic seminaries and men with beards—seen as a symbol of their faith—are persecuted.

Amnesty International says torture and disappearances are endemic in the region, and the State Department’s own annual human rights report is scathing.

US officials said Kerry intends to take up the issue of human rights at each of his stops in the region, but also to reassure his hosts of ongoing US security cooperation.

On the eve of his voyage, Human Rights Watch demanded that he speak up in his meetings with Central Asian leaders.

Kerry’s visit will also serve to remind Washington’s friends in Central Asia that the United States supports their sovereignty at a time when Vladimir Putin’s Russia is asserting itself in another neighbor, Ukraine.

The trip begins in Bishkek, the capital of Kyrgyzstan, and will take him to all four other republics, notably to the historic city of Samarkand in Uzbekistan.

There, he will hold the first meeting of a new diplomatic grouping bringing the US secretary of state together with all five Central Asian foreign ministers.

Read Next
Crises beset Juncker’s ‘last chance’ EU Commission one year on
EDITORS' PICK
Metro Manila to remain under COVID Alert Level 2 until December 15
IATF tightens border control, suspends entry of fully vaxxed nationals from ‘green’ countries
Villar Group gears up for AllValue Shopping Party on Dec. 3; around P 1-million promos and discounts up for grabs
Duterte open to making jabs mandatory; Cabinet mulls ‘pressuring’ the unvaccinated
Legarda: Ending Violence Against Women, a cause for all
A delightful blessing!
MOST READ
Quiboloy warns of ‘much worse than Omicron virus’ if his ‘persecution’ is not stopped
Omicron poses ‘very high’ global risk, countries must prepare–WHO
Marcoleta defends pol ads on ABS-CBN
Bongbong Marcos’ conviction in tax case not a crime involving moral turpitude — lawyer
Don't miss out on the latest news and information.