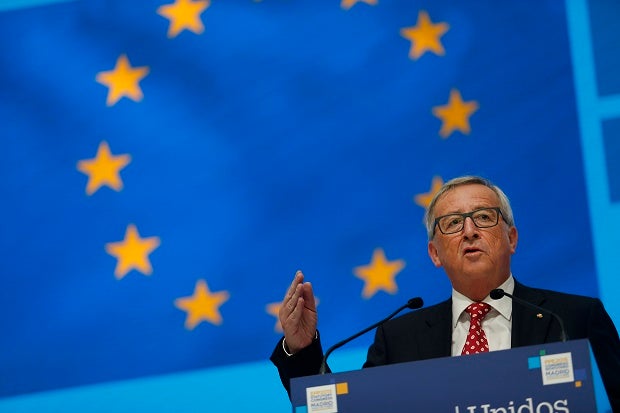 BRUSSELS, Belgium—A year after Jean-Claude Juncker took charge of what he called the “last chance” European Commission, his plans to win back sceptical voters have been partly sidelined by existential threats like the migrant and Greek crises, analysts say.

The wily former Luxembourg prime minister vowed when he took the reins of the 28-nation EU’s executive arm in November 2014 to be more “political” than his Portuguese predecessor, Jose Manuel Barroso.

That meant fewer rules about the shape of cucumbers and other red tape that had given Brussels a bad name, and more dealing with the bigger issues affecting increasingly disillusioned Europeans.

But while the Commission has not been afraid to be proactive, even if it annoys member states, that has failed to translate into wider support for Europe—as the victory of eurosceptics in Polish elections last weekend shows.

“This Commission and Juncker try to act much more political. With the migration issue they are facing now the second fundamental and serious crisis after the Greek-euro crisis. We will see only at the end if their actions were a success or a failure.”

Daniel Gros of the Centre for European Policy said Juncker’s Commission had been “more political than usual, it tries to act wherever there is a problem.”

During the Greek debt crisis, Juncker, 60, took a high-profile role.

He abandoned the Commission’s usual neutrality to urge Greeks to vote in favor of a bailout in a referendum and acted as a back-channel negotiator.

Europe’s biggest migration crisis since World War II, meanwhile, has seen the Juncker Commission jumping in where member states were slow to tread, setting out plans in the spring for quotas to share out Syrian refugees around the EU.

EU nations accepted the plans after months of wrangling, though some observers say the debate wasted time that could have been spent shoring up the continent’s borders.

Juncker has “given a lot personally” and he also “knew how to take on responsibilities at the risk of treading on the toes of other players,” said Jean-Dominique Giuliani of the Robert Schuman foundation.

But this can create problems too, such as when he called a mini-summit of some EU and Balkans leaders this month.

Calling summits is normally the privilege of Donald Tusk, the former Polish prime minister who heads the European Council, the organization that groups the leaders of all 28 EU nations.

“In the relation of Juncker and Tusk there are points of friction,” said Emmanouilidis. “We have to see if the differencies lead to an open conflict.”

Juncker’s hands-on approach has also tended to leave his own commissioners, including several prime ministers, in the shade.

With the possible exception of Danish competition commissioner Margrethe Vestager and her high-profile battles with Google and others, most have struggled to emerge from his shadow.

“What has changed is that the president’s circle is at the center of everything,” said Gros.

This centralization causes problems when Juncker himself is under fire, such as the “LuxLeaks” scandal over tax breaks given to multinational firms during his 18 years as Luxembourg prime minister.

The need to focus on the Greek and migrant crises, meanwhile, has left the Commission looking think on the issues it took office promising to deal with.

As for the so-called “Juncker Plan” to boost investment in the sluggish eurozone economy, it will not create the level of growth or jobs promised, due largely to a lack of support from EU member states.

Crucially, Juncker’s vows to restore confidence in Europe, after eurosceptic parties surged in the European Parliament elections in 2014, have not been met.

Amid growing tensions over the migration crisis, Poland’s conservative Law and Justice party won elections in Sunday, beating the Civic Platform party once led by Tusk.

France’s far-right National Front is also on the rise and Britain’s UK Independence Party increased its vote share in elections in May, raising fears that Britons could vote to leave the EU in a referendum scheduled by the end of 2017.

In November last year, Juncker said that “either we win back the citizens of Europe, drastically reduce the level of unemployment and give young people a European perspective, or we fail.”

The final verdict will not be until 2019 at the end of his tenure, but there is clearly still some way to go.

The likelihood of a British exit from the EU