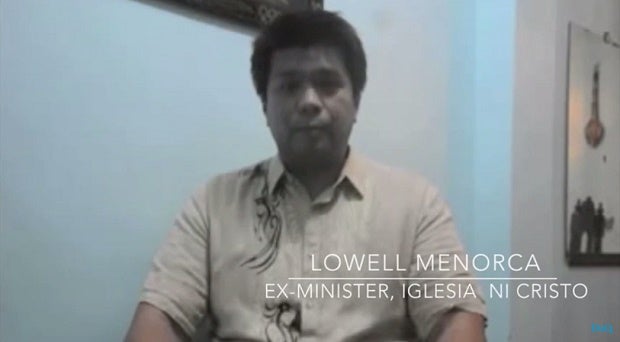 The expelled Iglesia ni Cristo (INC) minister who was “rescued” earlier last week will pursue criminal charges against church officials he claimed held him and his family captive for more than three months, his lawyer said.

All that is left for Lowell Menorca to decide is when to file the illegal detention charges against his alleged captors, lawyer Trixie Cruz-Angeles told the Inquirer on Saturday.

The lawyer also said the siblings of INC executive minister Eduardo Manalo, who are being held inside the INC compound and are barred from receiving visitors, will also be filing a claim for damages against the INC leadership.

“It will be up to (Menorca) if he wants to file it or wait until after the hearing on [the writ of] amparo,” said Angeles when reached by phone yesterday.

The Supreme Court on Friday granted the Menorca relatives’ petition for writs of amparo (protection) and habeas corpus (to produce a detained person in court), releasing the resolution just hours after the family regained its freedom.

The grant came two days after Menorca’s younger brother, Anthony, and Jinky’s twin sister, Jungko, filed the petition on behalf of their loved ones.

The high court remanded the case to the Court of Appeals (CA) for proceedings on Nov. 3, ordering respondents INC executive minister Eduardo Manalo and members of the church’s Sanggunian (governing council), including Radel Cortez, Bienvenido Santiago and Rolando Esguerra, to bring the Menorcas to the court.

While their rescue has rendered the habeas corpus petition moot, the CA proceedings would determine whether the court would grant the Menorcas permanent protection from the respondents, Angeles said.

“We will be the ones to bring them (Menorcas) to the court. I expect that they (INC respondents) will contest the assertions we made on behalf of Menorca. They will say they were not illegally detained. This is expected, it’s adversarial,” Angeles told the Inquirer.

“Except the difference for us now is, we have protection. They (respondents) can’t approach him anymore. This is what we really wanted, to protect him, and now that he’s outside, away from them, to continue the protection,” the lawyer said of her clients who are currently staying at an undisclosed safe house.

She emphasized that in granting the writs, the high court recognized that the family had indeed been taken against its will.

Angeles said the INC respondents should participate in the CA proceedings: “They’d better have a good explanation if they’re not going to be there, and I would not look kindly on anybody leaving the country at this time.”

During the proceedings, Menorca is expected to give his testimony on the family’s alleged detention—the record of which could later be used when it is time for him to file criminal charges against the church leaders allegedly behind his family’s abduction.

The lawyer said she and her client had yet to decide whether the case would be filed at the Department of Justice (DOJ), just like the pending charges that similarly situated ex-minister Isaias Samson Jr. filed against the Sanggunian members in August.

The case triggered INC rallies outside the department’s offices in Manila and on Edsa, accusing then Justice Secretary Leila de Lima of giving undue attention to the complaint when the DOJ accepted the case.

De Lima had said she would not give in to pressure and promised Samson due process. Malacañang has repeated this pronouncement. Yet Samson’s case remains pending at the department.

“We’ll have to see because we learned a big lesson. Cause up to now, we don’t have a prosecutors’ panel. Mr. Samson filed in August. It’s now October,” said Angeles.

The Menorcas’ ordeal began on July 16. The minister was among several INC members accused of posting online articles critical of the INC leadership.

That day, Menorca was reportedly abducted by a group of men from their church in Sorgoson. Menorca later turned up in police custody in Dasmariñas, Cavite province, for alleged illegal possession of explosives. Under strange circumstances, the police chief of Dasmariñas later released Menorca to an INC lawyer.

He eventually ended up at the INC compound in Quezon City, later to be joined by his wife and family who were also under alleged threat by Sanggunian members.

The INC denied that the family was being detained but Menorca confirmed his abduction in a video released to the media on Friday, becoming the second ex-minister after Samson to accuse Sanggunian members of taking him and his family hostage.

Sought for comment yesterday, Samson said Menorca’s revelations should be an eye-opener for other church members.

“I am praying and hoping that it will open the eyes of the members not only to the corruption but also to the violent and criminal-minded side of these high-ranking ministers,” said Samson when reached by phone on Saturday.

In the case of Angel Manalo, a sibling of the INC executive minister, Cruz and another lawyer, Ahmed Paglinawan, obtained the court’s authorization to visit their client together with a notary public for the purpose of conferring with their client. They said their client “could not as yet come out of the building.”

The lawyers said they were denied entry when they tried to visit early this month.