Journalist of the year: Truth-telling for real change 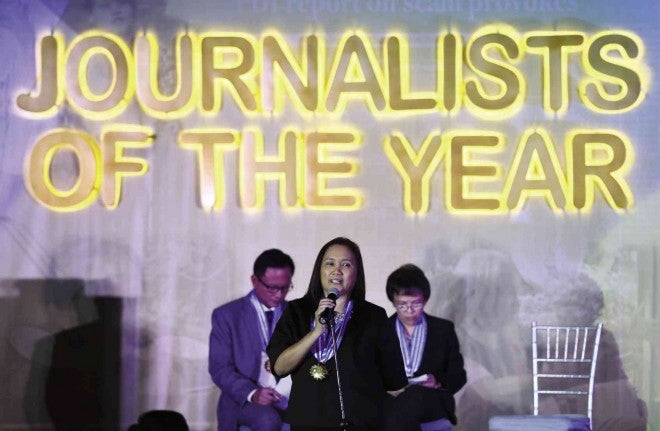 JOURNALISTS OF THE YEAR The Inquirer’s Nancy Carvajal with coawardees Howie Severino of GMA 7 and Marites Vitug of Rappler: Bringing to the public the “face of corruption.” LYN RILLON

More than the accolades, it’s all about spreading the brand of journalism that brings real, tangible change: from unseating a President to scrapping discretionary funds known to serve more as politicians’ pocket liners than seeding much-needed public service reforms.

Such was how Inquirer reporter Nancy Carvajal regarded her latest recognition when she was named one of three Metrobank Journalists of the Year (JOY) on Thursday night.

“When the Inquirer broke the story on the P10-billion pork barrel scam, winning awards never crossed our minds,” said Carvajal, the reporter behind the fund diversion scheme exposé that tagged lawmakers and businesswoman Janet Lim-Napoles.

“But recognition of the Inquirer’s commitment to what it does, its hard work, by Metrobank Foundation does not only make us happy; the JOY Award is a stern reminder to us of the great responsibility that journalists carry on this side of the world,” she said as she accepted the award.

The 2013 six-part series that may well be the decade’s biggest exposé is part of the body of work that brought Carvajal the plum prize, winning the award alongside seasoned journalists Howie Severino, GMA Network Inc. anchor and vice president for professional development, and Rappler editor at large Marites Vitug.

“The investigative report on Napoles’ PDAF (Priority Development Assistance Fund) scam is a solid testament to the Inquirer’s legacy and particularly unique brand of journalism: first, fair, fearless,” said Carvajal, a 23-year veteran at the Inquirer.

The Inquirer is celebrating its 30th anniversary this year, commemorating with a theme that is more of a battle cry: “Courage Beyond Words.”

Since Carvajal first broke the pork barrel scam story, investigations have sent Napoles and three senators to jail and led to the Supreme Court’s scrapping of the PDAF.

Metrobank cited Carvajal’s story as one that gave the public a better grasp of the extent of official corruption in the country.

“This hard work has led to a media exposé that shook our country’s collective conscience and set the wheels of justice turning,” said Commission on Elections Chair Andres Bautista, in reading the citation for Carvajal, first to be recognized among the night’s three awardees.

“The investigative series imbued the invisible yet pervasive image of government corruption with an all too real face, uncovering a paper trail that led down a rabbit hole of unrivaled collusion and corruption among fixers, dummy entities and lawmakers’ offices consequently exposing the weakness of the bureaucracies’ budgeting and procurement processes,” he said.

Other stories that caught the JOY judges’ attention was the 13-part series on the computer files of Benhur Luy, which revealed the names of those allegedly on the take in the PDAF scam; a two-part series on Vice President Jejomar Binay’s alleged 350-hectare property in Batangas; and reports on the apparent police rubout of 13 people in Atimonan, Quezon, in 2013.

In expressing thanks for the recognition she received, Carvajal reintroduced her audience—a gathering of top personalities in the government and the justice sector, among them Chief Justice Maria Lourdes Sereno and Ombudsman Conchita Carpio Morales—to the Inquirer’s long tradition of fearless reportage.

“Before the pork barrel scam filtered into the nation’s consciousness, there were other stories that changed the course of our country’s history and made the Inquirer the most influential news organization of the country today,” Carvajal said.

“Indeed, our stories make a difference in our society, to say the least,” said Carvajal, who was recognized as Asia’s Journalist of the year in the Awards for Editorial Excellence of the Society of Publishers in Asia (Sopa) in June this year.

Carvajal cited the commitment of the Inquirer’s owners to truth-telling and their management style of fostering and nurturing the paper’s editorial independence.

“This could not have happened without the support of the principled owners of the Philippine Daily Inquirer: Marixi Prieto and Sandy Prieto-Romualdez stood by the editorial in our worst times,” Carvajal said.

She cited how the Inquirer surmounted an advertisement boycott in 1999, instigated by then President Joseph Estrada amid the paper’s hard-hitting stories against his administration. He was ousted the following year.

Carvajal also recognized her sources, including her very own “Deep Throat,” or chief informant, “who said I could name him after 20 years.”

She also raised the plight of the whistle-blowers, who have also become virtual prisoners as the PDAF trials proceed amid continuing threats to their lives.

In her speech, Sereno cited Carvajal’s work in highlighting the role of journalism in nation-building.

“The pork barrel scam that erupted in 2013 first became known when the issue came out on the front pages of the Philippine Daily Inquirer for a number of days. Of course, that is partly a result of the work of one of our awardees tonight, Nancy Carvajal,” Sereno said.

“The truth-telling—and consequently, the nation-building—that is happening now highlights the trust being given to journalists: by whistle-blowers who run to the media for cover, political figures who bring forth their agenda, and even individuals who simply want to be heard on issues affecting them or their communities,” she said.

This year’s JOY winners took home medals and P300,000. They will hold lectures in select cities across the country “to share their work with student journalists and media practitioners,” said Metrobank Foundation Inc. president Aniceto Sobrepeña in his remarks.

Metrobank holds the JOY awards, which started in 2013, every two years. It is one of the bank foundation’s programs to recognize outstanding professionals who “form the pillars of our democracy,” including teachers, soldiers and police officers, Sobrepeña said.