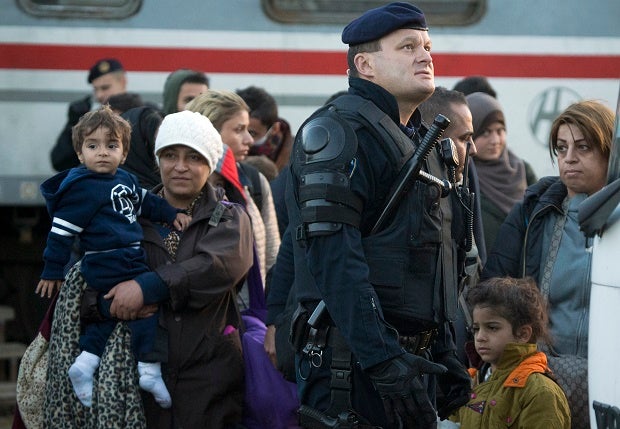 A Croatian police officer assists migrants to board a bus in Cakovec, near the Croatian-Slovenian border, Saturday, Oct. 17, 2015. Hungary shut down its border with Croatia to the free flow of migrants, prompting Croatia to redirect thousands of people toward its border with Slovenia. AP Photo

PETISOVCI, Slovenia—The latest news as migrants fleeing war or seeking a better life make their way across Europe by the tens of thousands. All times local.

Croatian police say more than 5,000 migrants have entered the country since Hungary closed its border because of the flow of people hoping to reach Western Europe. Slovenia says it can take about half of the number per day, fueling fears that migrants could get stuck in Croatia or further east in Serbia or Macedonia.

Croatian police also said Saturday a little over 190,000 have come in from Serbia since mid-September. Most have been transferred to Hungary, but Croatia started redirecting them to Slovenia after Hungary placed a barbed-wire fence on the migrant crossing at midnight Friday.

Slovenian Interior Ministry official Bostjan Sefic says “we will accept as many migrants as we can take care of.” Several hundred have entered so far, some of whom already have moved on to Austria.

Slovenia’s government has cleared the way for the armed forces to assist police in managing the influx of migrants from Croatia.

Officials said Saturday the military will be deployed if there is a large number of migrants or illegal crossings. Authorities say the army would provide logistical support to the police, but won’t have any authority over migrants.

Prime Minister Miro Cerar says “we are going to focus even more on safety and security and order so our country can function normally.” He adds that Slovenia is a transit country for migrants and if “destination countries begin adopting stricter measures at the border, Slovenia will follow suit.”

Most migrants want to go to the rich EU countries. Slovenia says it will allow in new groups after previous groups leave the country.

A disused school in southern Sweden that was planned to house 80 refugees has burned to the ground in what police say is a case of “aggravated arson.”

No arrests have been made.

Ljungby town officials said the school in Kanna had been destroyed. It closed in 2011and had received a make-over to be ready to house refugees.

Earlier this month, Sweden’s government has ordered the immigration agency to set up tents to provide temporary accommodation and has tasked local authorities with drawing up an inventory of all premises that can be used as shelters.

More than 150,000 asylum seekers are expected to arrive in Sweden this year.

Slovenia’s official STA news agency says some of the migrants who have entered the country from Croatia have already reached the border with neighboring Austria.

The report says several dozen migrants were being registered by Austria’s authorities at the Spielfeld crossing and then would be taken further inland.

Slovenia has set up a refugee center at the border with Austria as most migrants fleeing war and poverty in the Middle East, Africa or Asia wish to reach Germany or other rich EU nations.

Migrants were rerouted to Slovenia from Croatia on Saturday after Hungary closed its border for free flow of people wishing to go to Western Europe.

Several hundred people have entered Slovenia so far on Saturday and more are expected later in the day.

The Greek coast guard says four children on a boat carrying migrants have drowned after the vessel sank off the small island of Kalolimnos in the southeastern Aegean.

A coast guard vessel rescued 11 men and two women in the same incident. Their nationalities haven’t immediately been identified.

U.N. Secretary-General Ban Ki-moon told refugee children at a shelter in Rome not to despair, saying he too as a child was forced to flee war.

Ban asked any 6-year-olds at a pre-school and shelter run by the Community of Sant’Egidio non-governmental organization hosting refugees and asylum-seekers to raise their hands. He told them that he fled his village in Korea in 1950, when he was their age, because “there was a big and very terrible war in Korea.” He added: “Don’t lose your hope, don’t despair.”

During the visit, Ban also welcomed the U.S. government decision to extend the military mission in Afghanistan and urged European countries “to show global solidarity” in taking in migrants seeking to escape war, discrimination and hunger.

The minister, Ranko Ostojic, says that “nobody can stop this flow without shooting.”

Ostojic said Saturday that Croatia was sending migrants to Slovenia instead and that problems could emerge only if Austria or Germany close their borders.

Ostojic says that would mean “domino effect and lot of troubles for all countries.” He adds “this organized system of receiving people is something that is giving a better security situation.”

Ostojic insists that if Croatia tried to keep the migrants in the country “they would find their own way” to leave.

Nearly 190,000 people have passed through Croatia since mid-September on their way to Germany and other rich EU countries.

The United Nations refugee agency believes Slovenia has the capacity to accept some 7,000 migrants coming to the country on their way toward Western Europe.

UNHCR spokeswoman Caroline Van Buren said at Slovenia’s border with Croatia Saturday that “all is going well” as the first groups of migrants started arriving to the small Alpine nation.

The flow has turned to Slovenia after Hungary sealed its border with Croatia for migrants shortly after midnight Friday. Most of the people fleeing war and poverty in the Middle East, Africa and Asia want to reach rich EU nations such as Germany.

Slovenia has said it will accept migrants as long as Austria and Germany keep their borders open. Several hundred people have come so far with more expected later Saturday.

Hungary says it has temporarily reinstated border controls at its frontiers with Slovenia to prevent migrants from entering the county in an unrestricted manner.

The measure announced Saturday came hours after Hungary closed off its borders with Croatia, from where thousands of migrants a day were entering. Both Slovenia and Hungary are part of the European Union’s Schengen zone of border free travel.

Since Croatia said it would start sending migrants to the border with Slovenia, Hungary fears they could try to cross into Hungary from Slovenia on their way to Germany and other European destinations.

Foreign Minister Peter Szijjarto said in a statement that the government was defending Hungary and its citizens from the “mass wave of unidentified, uncontrolled migrants.”

German Chancellor Angela Merkel says she won’t offer “false solutions” to the migrant crisis as she faces pressure to do more to limit the influx.

Merkel told Saturday’s edition of the daily Frankfurter Allgemeine Zeitung that Germany can control its borders but not close them completely—”that wouldn’t even succeed with a fence, as the example of Hungary shows.”

Thousands of new arrivals a day have been stretching Germany’s capacity to house refugees and other migrants. But Merkel said she won’t promise “false solutions” because they wouldn’t even hold for two weeks and would create bigger disappointment that the problem hasn’t been resolved.

Merkel added: “I am working with all my power for sustainable solutions, and they don’t depend on us Germans alone and will take time.”

Turkey’s state-run news agency says 12 migrants have drowned after their boat sank off the Turkish coast in the Aegean sea.

The Anadolu Agency says the Turkish Coast Guard on Saturday rescued 25 other migrants from the sea.

The group was trying to reach the island the Greek island of Lesbos—an entry point for a majority of migrants making the journey from the nearby Turkish coast.

There was no immediate information of the nationalities of the migrants.

Amnesty’s call Saturday came a day before German Chancellor Angela Merkel is scheduled to hold talks with Turkish officials on an EU plan that would give concession to Turkey in exchange for stemming the flow of migrants into EU countries.

Officials say the concessions would include an aid package, easier access to EU visas for Turkish citizens and speed up EU membership talks.

Amnesty said the EU should be looking for ways to “offer safe and legal routes to refugees to reach Europe.”

The group said: “A deal premised on keeping refugees in Turkey fundamentally ignores both the challenges they face there and the obvious need for the EU to offer protection.”

The first groups of migrants have reached Slovenia’s border, arriving from Croatia on buses. Migrants hoping to reach western Europe have turned that way after Hungary sealed off its territory for them.

Slovenian police say five buses carrying about 300 migrants arrived Saturday to the border checkpoint at Petisovci. Spokeswoman Suzana Raus says migrants will be transferred to a migrant center near the border with Austria after they pass a registration procedure.

Most migrants are expected to move on from Slovenia to Austria and further on to Germany and other more prosperous countries of Western Europe.

Slovenia, a nation of 2 million, has said it wants to control the number of people coming to its territory from Croatia. It has beefed up border police and suspended regular train traffic with Croatia.

Croatia’s president has demanded strict control over the country’s border with Serbia after Hungary closed its own border with Croatia to migrants hoping to reach Western Europe.

Kolinda Grabar Kitarovic late Friday urged the government to direct all migrant traffic to official border crossings rather than allow them to enter through illegal routes.

Some 180,000 people have passed through Croatia since mid-September. The country was expected to redirect the migrant flow to Slovenia.

Grabar Kitarovic says Croatia should only allow in only the migrants who are certain to leave the country, signaling fears that thousands of migrants could get stuck in Croatia if Slovenia slows down the flow.

Thousands of migrants are pouring into Croatia from Serbia as the influx of people hoping to reach Western Europe continued despite Hungary’s decision to block them from its territory.

Shortly after midnight Friday, Hungarian police in full gear pulled a barbed-wire fence over a passage on the Croatian border where some 140,000 migrants have passed since mid-September.

Croatia has said it will now redirect the migrants toward Slovenia, its other neighbor. First groups are expected to arrive at the border later on Saturday.

Slovenia has suspended regular train traffic with Croatia in anticipation of the influx.

Authorities in Slovenia have said they would accept controlled numbers of migrants as long as its neighbors Austria and Germany keep their borders open. Slovenia’s national security council meets on the issue Saturday.