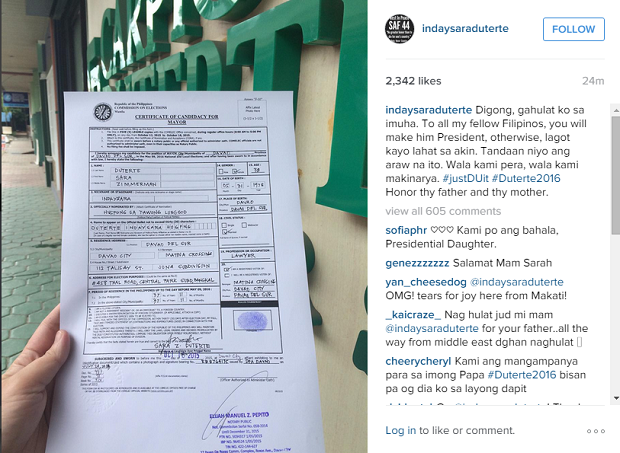 In an Instagram post, Sara Duterte daughter of Davao City Mayor Duterte, posted a photo of her certificate of candidacy for mayor of Davao City with a caption which asks for support to make his father president.

“To all my fellow Filipinos, you will make him President, otherwise, lagot kayo lahat sa akin (watch out for me),” the younger Duterte said in her post.

(Remember this day. We have no money, we have no machinery.)

The older Duterte has repeatedly shunned a possible presidential bid in the 2016 national elections. On Thursday, his executive assistant filed a COC on his behalf.

But supporters of Duterte remain at the Commission on Elections office in Manila, continue to urge him to run for president in next year’s polls.

The last day of filing for candidacy is Friday, October 16. CDG

No is No: Aide files Duterte’s COC for Davao City mayor