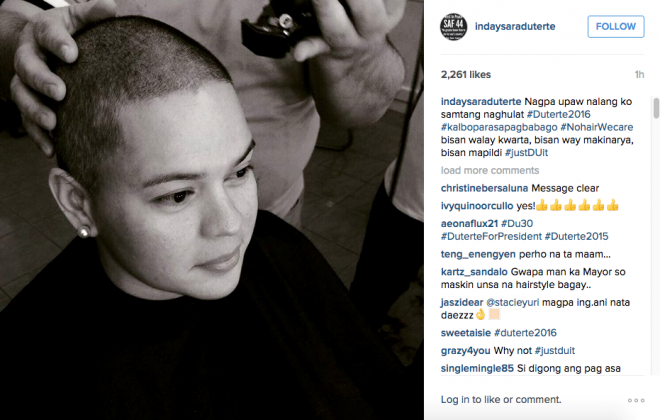 DAVAO CITY—Former Mayor Sara Duterte-Carpio shaved her head as people awaited with anticipation if her father, the controversial Mayor Rodrigo Duterte, will finally file his certificate of candidacy (COC) for the presidency at the Commission on Elections in Manila.

“Nagpaupaw nalang ko samtang naghulat (I decided to shave my head while waiting),” Sara wrote on Facebook as she posted a picture of her head being shaved.

“Bisan walay kwarta, bisan way makinarya, bisan mapildi (Even without money, even without machinery, even if we lose), she wrote with the hashtags “Duterte 2016” and “KalboparasaPagbabago.”

On Monday, the elder Duterte announced for the nth time that he was not running for president and apologized to all his supporters. Friday, Oct. 16, is the last day of filing of COC.

In a post of another picture showing the back of her shaven head, Sara wrote, “Sending good vibes to Digong,” using what the public fondly calls her father.

It still could not be ascertained if her move was meant to support her father or to spite him. Duterte had repeatedly said his family, particularly Sara, had been against his running for president, the primary reason he cited for not running.

This prompted a Duterte fan to address Sara in a Facebook post not to be so “selfish” as to prevent her father from serving the country, when the people needed him. Sara retorted back, “A wise man and a seasoned politician could not possibly make a decision on the basis of my opinion,” daring the fan to first study her law.

On Wednesday afternoon, Christopher “Bong” Go, Duterte’s executive assistant, posted on Facebook a photo of him having a haircut.

“Pagupit ako. Getting ready for filing of my boss. Hoping for a miracle. Thanks to all,” Go said on his Facebook post.

Another Facebook user, Katuray Keith Kath, posted a photo of her with skinhead Sara.

Katuray Keith Kath, herself sporting a shaved head, said the photo was taken in a mall here.

Another Facebook user, Janry Castro Polinar, posted a photo of Sara sitting inside a beauty salon,  waiting for her companion who was also having her hair shaved.

On Wednesday afternoon, city councilor Al Ryan Alejandre and Danilo Dayanghirang also had their heads shaved. They were joined by Frank Villaroman, chief of the Public Safety and Security Command Center.