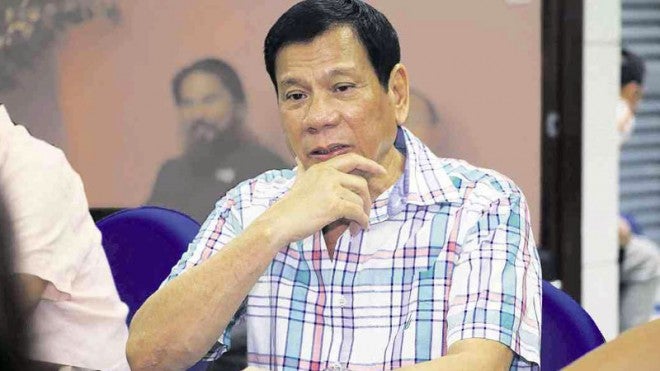 DAVAO CITY—Mayor Rodrigo Duterte ended the dream that had driven his supporters to somewhat weird behavior when he finally filed his certificate of candidacy for mayor at the Commission on Elections (Comelec) district office here Thursday.

The shirt Duterte’s executive assistant, Christopher Go, was wearing said it all—“No is No.”

“Sinabi ko, Ayoko Ko. Ang titigas ng Ulo Nyo!” (I said I don’t want to, you’re all very stubborn) was written on the back of the shirt that Go wore when he filed Duterte’s COC.

“Thank you, but I have decided to run for mayor of Davao City again,” was the message that Duterte wanted to convey to his supporters, Go said.

In a brief press briefing at a firing range here in the late afternoon, Duterte said: “I never said anything about wanting to be the next president even from the start.”

“People wanted it but I never did. I already filed my COC, that’s final,” he said.

The COC filing doused the high expectations that had been building here since early morning, when people began flocking to the city’s barbershops and beauty salons to have their heads shaved, in the hope that Duterte would make the equally “bold” move to seek the presidency.

On Wednesday, the mayor’s daughter, Sara, posted on social media a photo of her bald head. Her father’s supporters took it as a sign that Sara was giving her father the go-ahead to run for president.

Duterte had given Davao City Administrator Melchor Quitain, the vice chair of Duterte’s Hugpong sa Tawong Lungsod, a special power of attorney to file the COC for him. Quitain accompanied Go in filing Duterte’s COC.

Asked by reporters if it was still possible Duterte would withdraw his COC for mayor and file another for the presidency, Quitain said that when the mayor says no, he really means no.

In Manila, Comelec spokesperson James Jimenez said that under Comelec rules, Duterte may still file a COC for president until 5 p.m. today, even if he has already filed a COC for mayor of Davao City.

A candidate may file multiple COCs within the filing period, said Jimenez. So long as the candidate withdraws all the other COCs filed, his or her final COC would be valid, he added.

Today is the last day for filing of certificates of candidacy for all elective posts nationwide.

Duterte’s filing of a COC for mayor shocked both his supporters and the larger public, who had earlier expected him to run for president, the first one from Davao and Mindanao to do so.

Shortly after the filing, members of the Association of Barangay Captains (ABC) who had shaved their heads, shook their heads, but then laughed it off and called themselves “sawi” (forsaken).

Bai Ali Indayla, third nominee of the Gabriela Women’s party-list, said she was disappointed because she expected Duterte to run.

“Because we know how rotten the system is and we believe that a person like him can make some reforms, but still, we respect his decision,” Indayla said.

Some of the 300 people holding a vigil outside the Comelec Intramuros office in Manila, waiting for Duterte to arrive, had also gone bald.

The group was made up mostly of seamen and Mindanao residents who gathered at the corner of General Luna and Soriano Streets bearing streamers and banners announcing, “Duterte for President.”

“Everyone is supporting him because he is a peace-loving man. He treats everyone equally. He is a man of the masses,”  said the shaven Adjok Amirol, 43, who was with a group of Tausugs.

Asked why he and his group had shaved their heads, he said, “Kalbo para sa pagbabago (Going bald for change).”

Florenciana Cornejo, 65, of Quezon City, waited until 5 p.m. for Duterte to make an appearance.

Sixty-year-old Avelina Nataleo, of Cavite, was the only woman to volunteer to cut her hair to show her support for Duterte.

“I support him because he is the only one who can bring real change,” Nataleo said as she tearfully watched her hair fall to the ground and be blown away by the wind, as others cheered her on.

Randolph Ruiz of Zamboanga said that they would continue to wait for Duterte to turn up at the Comelec office. “If not today, he will come tomorrow,” he said. With Christine Avendaño