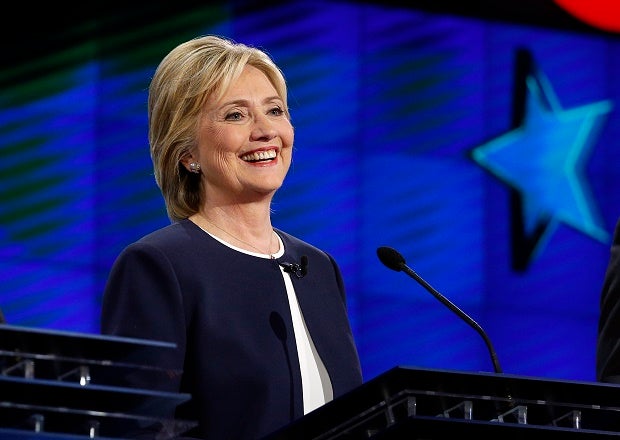 WASHINGTON — Hillary Rodham Clinton’s polished performance in the first Democratic debate served more than anything as a warning to the chaotic Republican field about her likely strength in a general election.

While her strong debate performance may have solidified her standing as the party’s front-runner, she still faces tough competition from Vermont Sen. Bernie Sanders, an independent and self-proclaimed democratic socialist. Clinton aides insist the former secretary of state isn’t taking the Democratic nomination for granted.

The debate was the first for the Democratic hopefuls with nearly four months to go before primary voting begins and more than a year before Election Day. On the Republican side, billionaire Donald Trump has surprised the political world with his rise to the top of the polls, but no clear favorite has emerged among a crowded field of contenders.

On Tuesday, Clinton mostly appeared to be setting her sights on the Republican field.

“I can take the fight to the Republicans, because we cannot afford a Republican to succeed Barack Obama as president of the United States,” she said. She referenced Republicans a dozen times during the two-hour debate, even putting the party alongside the Iranians and National Rifle Association on a list of enemies she was proud to have made.

David Plouffe, an architect of Obama’s two campaigns, wrote on Twitter that Clinton looked like a candidate who could win the general election.

To be sure, Clinton remains a flawed candidate. Her evolving policy positions leave her open to charges that she shifts with the political winds. She’s a Washington insider in an election cycle where voters have shown more interest in outsiders.

And just as the Republicans’ raucous first two debates exposed deep divisions and pressure on candidates to appease conservative primary voters without alienating the national electorate, the opposition party argues that Clinton’s shifts to the left on major issues would hurt her in the general election.

Florida Sen. Marco Rubio said Wednesday that Clinton was locked in “a race to the left to see who could be the most radically liberal, the most big government.” And former-Florida Gov. Jeb Bush cast Clinton as the beneficiary of a Democratic field that sidestepped confrontations over her private email use, a controversy that has dogged her campaign for months.

“I would have taken her to task for that,” Bush told Fox News. “If she wins the nomination and I win the nomination, trust me, this is not going to end.”

Added Trump: “I think the Democrats, frankly, I think they are protecting her.”

“She is now firmly outside the mainstream of the American electorate as part of her calculating efforts to satisfy the liberal base of her party,” said Kevin Madden, who advised 2012 Republican nominee Mitt Romney’s campaign.

Democratic strategists, however, argue that what were once viewed as liberal policies are increasingly becoming mainstream. Public polling supports that assertion on some issues.

On immigration, a CBS News/New York Times poll last month showed 58 percent of Americans said people living in the US illegally should be allowed to stay and apply for citizenship, a position Clinton supports.

Majorities of Americans also support government efforts to combat climate change, and they approve of gay marriage, positions backed by Clinton and other Democratic presidential candidates.