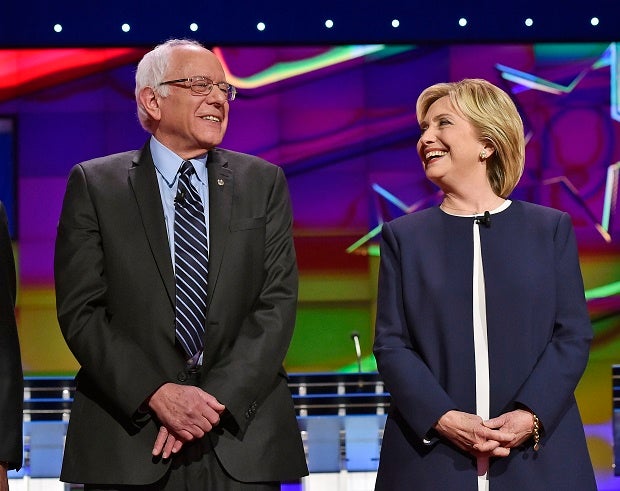 Democratic presidential frontrunner Hillary Clinton and top rival Bernie Sanders finally squared off Tuesday in the party’s first debate of the 2016 campaign, with both singling out income inequality as the scourge of America.

The main protagonists in the debate drama clearly emerged as Clinton and Sanders, an independent senator from Vermont who has drawn huge crowds on the campaign trail. Three other hopefuls seeking to make their mark with a national audience round out the field.

Clinton is keen to inject some excitement into her campaign and show she can rally the Democratic base from now into next year, while Sanders must test whether his “political revolution” can translate to the national stage.

While there were few early signs of a dramatic clash of personalities as seen in the first two Republican debates, the 67-year-old former secretary of state will no doubt face pressure from the upstart Sanders in their much-anticipated encounter.

Should Clinton take on Sanders too aggressively, she risks antagonizing liberal voters that have lined up behind the Vermont senator.

But straight out of the gate, in a bid to reinforce her liberal bona fides, Clinton insisted “I don’t take a backseat to anyone” when it comes to progressive experience.

Sanders, buoyed by loud cheers from the crowd, insisted he was not a part of the “casino capitalist” system that is creating a “rigged economy” in America.

“I believe in a society where all people do well, not just Wall Street billionaires,” he said.

Nearly eight years removed from her campaign clashes with ultimate White House winner Barack Obama, Clinton still displays a firm grasp of the issues—and was expected to expand on her policy prescriptions.

Besides focusing on headline proposals such as gun control, health care or regulating Wall Street, Clinton will want to prove that she can be the first woman to win the White House, despite a recent downward trend in her poll numbers.

Clinton still leads nationally, but she trails Sanders by nearly 10 points in New Hampshire and holds only a modest lead in Iowa. Both are key early-voting states in the nomination process, setting momentum for the rest of the primary race.

The election is nearly 13 months away, but in February Americans begin the months-long voting process of selecting their party nominees.

Clinton’s lead increases in debate state Nevada, where her support has reached 50 percent compared to 34 percent for Sanders and 12 percent for Vice President Joe Biden, according to a CNN/ORC poll released Monday.

Biden has spent months mulling jumping into the race but he has yet to do so. While CNN said it saved him a spot on stage, he was a no-show.

Clinton still elicits more unfavorable than favorable reactions among US adults (49 percent to 47 percent), but she is far more popular than Sanders among Democrats, who view her favorably by 79 to 19 percent, compared to Sanders’ 47-24 percent split, a Washington Post-ABC News poll out Tuesday shows.

For 74-year-old Sanders, a rumpled, self-declared democratic socialist, Tuesday was shaping up as the biggest test of his decades-long political career.

Clinton has rarely mentioned Sanders on the campaign trail, but she and the senator squared off on stage in the first minutes of the debate.

She used her rival’s moderate position on guns—Sanders hails from Vermont, a rural state with few firearm restrictions—to highlight an area where liberals who seek tighter gun laws break with Sanders.

Asked if Sanders was tough enough on the gun issue, a steely Clinton said “No, not at all.”

“This has gone on too long,” Clinton said of gun violence, in the aftermath of a series of deadly shootings on school campuses. “And it’s time the entire country stood up against the NRA,” she said, referring to the National Rifle Association, the large pro-gun lobby.

Sanders has said he would avoid “personal attacks,” but he has suggested he will hit Clinton on her recent position shifts, including her opposition to the Keystone oil pipeline and a huge Pacific Rim trade deal that she supported on multiple trips to Asia.

He may also point to his 2002 vote against authorizing the use of force in Iraq sought by George W. Bush, which Clinton voted for.