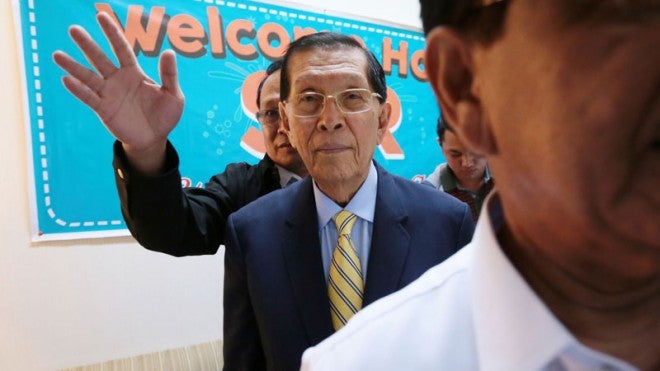 After suffering  from dengue, Senate Minority Leader Juan Ponce Enrile returned to the Senate  on  Monday with  a stern warning to “mercilessly” cut the  budget  of  non-performing agencies.

READ: Enrile rushed to hospital due to dengue—daughter

Enrile issued this warning  during the hearing  of the Senate  finance subcommittee on seven agencies, including the Philippine  Drug Enforcement  Agency  (PDEA),  the first  agency that he scrutinized over its anti-drug campaign.

Apparently not satisfied by Cacdac’s  answer, Enrile asked the PDEA chief  if  his estimate of the drug problem  in the country was either under control or beyond  control.

“Come on, you’re not  in the Philippines  if that’s what you think. It’s all over the country, everybody talks about it…” said the Minority Leader, noting that the  drug problem exists, despite  the presence of various  anti-drug  centers of the government such as barangay anti-drug centers, and municipal or provincial ant-drug centers.

“All of these   are instruments controlling these menace but people, especially the youth,  are being destroyed by this problem. How can you justify the budget coming from  the taxpayers or the people to spend  for you if you can’t control this kind of law problem?”

“You know, I’m telling  you gentlemen ha, I’m  going out of politics at wala akong sisinuhin dito. If you do not perform, we’ll cut your budget mercilessly.  You better perform better…” Enrile added.

And  when  Cacdac  attempted to present to the committee the national anti-drug  plan of action that was approved by  the President for 2015 to 2016,   the senator interrupted  him and  said: “Even if it’s approved by the President, if you don’t perform, that’s meaningless to me. The President can’t function without the under links…”

Enrile also reminded other  officials and representatives present in the hearing “to  justify the  money of the  people for yourselves, for your agencies.”

His attendance in the hearing was his first  appearance in the Senate after he  was  rushed to  the  hospital last month due to dengue.

The senator  had been in hospital arrest until the Supreme Court granted him temporary  liberty on plunder charges in connection with the  pork barrel scam.

Enrile returns to Senate, goes straight to his office

Speaker Belmonte in hospital with dengue